Joe Rapczynski is signing copies of “The Junior Varsity Team Is Playing” in NJ this week.

Joe Rapczynski grew up in Philadelphia. His house was right around the corner from St. Anne’s school and right up the street from the local playground. That, combined with a loving family and good friends, were all that a young boy needed to grow up in Philadelphia in the 1960’s. He went on to accept a full basketball scholarship to LaSalle College, now University. Upon graduation, he became a history teacher and basketball coach where he taught and coached high school, college, and minor league professional basketball. He returned to his Alma Mater, Northeast Catholic High School, to lead them to a championship and won a state championship at Brandywine High School. In 1968 he was a sophomore in high school negotiating all of the challenges of growing up while being aware of changes taking place in the world. He was also the only player to play on both the JV and Varsity team and bear witness to all that transpired in 1968. He has been married to his wife Mary Jo for 40 years and is the proud father of Beth, Lori, and son JJ. He is also the proud grandfather of Bridget and Emily. 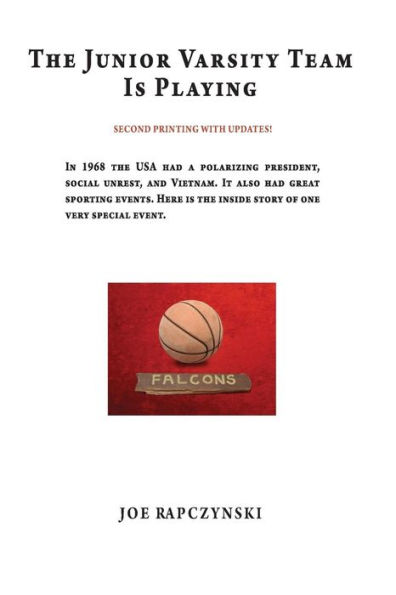 We live in a high tech world of rapid response, competing ideologies, and constant change. The world is smaller because of the global village that communications has made possible. All of these things impact the way we live our lives. People seek relief and distraction from the fast pace and stress of their lives through various means. Some people refresh themselves through family, friends, and community involvement. Unfortunately, other people fall prey to the influence of alcohol and drugs as a means of escape. Most people in today’s world enjoy sports as a way to cope with the demands of everyday life. Sometimes we have to remind ourselves that life wasn’t always this way.

In 1968, on the surface, the world seemed to be a simpler place than today. However, history shows that change was the operative word. Women began to to liberate themselves. No longer would they fit neatly into the tradition of homemaker without having the choice to do so. They began to act on nurturing themselves as well as nurturing others. Minorities that traditionally accepted their lesser roles in society began to demand their rights to equal opportunity. They organized into political blocs that got the attention of politicians and business owners. Young people were rebelling against the customs and expectations placed on them by society. They wanted a life of meaning to go along with their material self worth. They also had to cope with the Vietnam war which impacted all of the young people in the United States. Sometimes these groups were able to get their point across peacefully. Other times their point became blurred through violence and conflict with the established order. Still, sports were a constant, as a distraction and source of community pride.

The established order, or establishment, was taken by surprise by the changes taking place in 1968. They had lived through the Great Depression, fought in World War II, and most enjoyed the benefits of providing a better life for their families and communities than was provided for them. They were confused by the changes going on in society and sought something to vindicate the way they saw the world. Sports was one place they found it. One example took place in Philadelphia, where an against all odds proposition, produced a huge sports upset, that showed the traditional values of discipline, order, and doing the right thing provide the path to happiness and success. This is the story of the fractured year of 1968 and one event that cast light on all its turmoil.