Wayde Byard is signing copies of “L.A. Football Confidential” at VA next month.

Wayde Byard knows what it feels like to have the world’s biggest ball of string. A couple of decades back, he started to write a “small” football book that morphed into a 3,000-plus-page (and growing) definitive database on the history of the NFL.
Through the years, he’s used this resource to create accounts of America’s most popular game.

A graduate of the University of Missouri’s famed School of Journalism, Wayde has served as a sports editor, Associated Press College Basketball Pollster, and has interviewed more than fifty members of the Baseball Hall of Fame. Through it all, football has remained his passion; not just statistics, but the human stories behind the people who made America’s favorite game.

When he’s not pursuing his passion projects, Wayde serves as a public relations professional with one of America’s premier school districts. 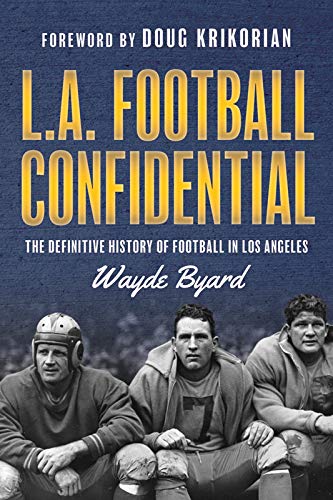 In this definitive guide to the history of Los Angeles football, Wayde Byard spotlights the Rams and the transients (Dons, Chargers, Sun, Express and Xtreme) who have made SoCal football unique. He recounts stories of the city’s teams, heroes, and most infamous players—the true legends of Hollywood.