Genie Massey is signing copies of “Murdered Without Cause” in MS next month.

Genie Massey is a motivational speaker, encouraging domestic violence and rape victims, in Battered Women’s Shelters, for the National Coalition Against Domestic Violence. Murdered Without Cause was written with the sole intention of sharing Tresia’s story to help others in overcoming their loss of a loved one by murder. 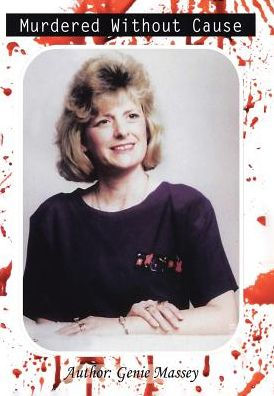 resia was murdered on March 21, 1992. She was in her BMW in a gas station parking lot, attempting to use a payphone to call her husband, who was three blocks away in his office building. Three gang members approached her car. One of those killers brandished a sawed-off twelve-gauge shotgun. He then shot her, at point-blank range, through her driver window. The fired shot blew a hole through her driver’s window and entered her body (just below her left arm and shoulder), exploding her heart. We were later informed that her husband, only one minute away, in his railroad employment office, drove to the gas station parking lot where Tresia was shot, removed her body from her car, then placed her in his truck, driving her the furthest distance until she died on the way to the nearest hospital, Jefferson Regional Medical Center, where she was pronounced DOA in the emergency room.

Years of doubt, anger, and grief have crippled my family, leaving us with unanswered questions, hurt, and enormous loss. We felt that no one understood what we were going through. It seemed to us no one cared, and the ones that acted as if they did slowly fell away like leaves on a tree approaching fall season. We felt ostracized and discarded, like we had a disease. Even those who were close to us avoided our family. We felt very alone and isolated. We were suffering. We were grieving. We had no one to tell us what was about to unfold in our lives or how Tresia’s murder was going to change the course of our lives. We didn’t understand the anger that we were feeling. Each and every task we set out to accomplish seemed to have stumbling blocks in front of them. The Christian family we had once known and grown to love over the years washed away like waves in the sea and disappeared from our memories as well because they did not reach out to us in our time of mourning. This was an added loss to us because we believed they loved us, would be there for us if we ever needed them, and that they cared about us. Instead, they acted afraid, like they did not want to be involved. Some of my former friends acted as though they were thinking my family was cursed, and even stated in our presence that we possibly did something to anger God and that we were being punished, that perhaps God was unleashing his wrath on us. This couldn’t have been further from the truth.

Murdered without Cause was written with the sole intention(s) of sharing Tresia’s story to help others in overcoming their loss of a loved one by murder. This book was also written to restore peace in my family to obtain a sense of closure that we never knew existed and to establish unspeakable justice by assisting survivors. The only way to cope with any loss by murder is to continue to pray and seek God’s divine purpose for your own life. By reaching out to you, the survivor of a loved one murdered, I want you to know that you are not alone. There was no book written, in 1992, that could tell us how we were going to feel or what we were going to go through. With this writing, my wish is to guide you through the stages of shock, anger, and grief, so you are able to rediscover a hope that moves you forward out of your sorrow, courage to lift your journey and a vision to claim a new purpose in life.