Doug Hocking will be signing his latest book “Terror on the Santa Fe Trail: Kit Carson and the Jicarilla Apache” in AZ next month.

Doug Hocking lives in southeast Arizona, where he has frequently visited the site of Forts Buchanan and Breckenridge, Cochise’s Stronghold, Johnny Ward’s Ranch, and Apache Pass seeing them through the eyes of historian, ethnographer and archaeologist. 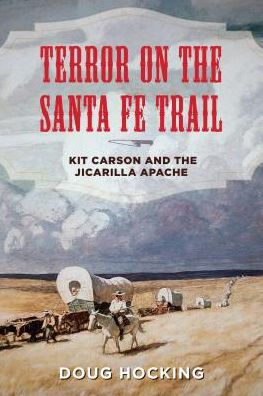 In the 1840s and 50s, the Jicarilla Apache were the terror of the Santa Fe Trail and the Rio Arriba. They repeatedly clashed with the cavalry and raided wagon trains, and there was bad blood between the band and the Army after the Battle of San Pasqual, when they were on opposite sides during the Mexican American War. In 1854, as traffic was on the increase along the historic trade route, the Jicarilla soundly defeated the 1st United States Dragoons in the Battle of Cieneguilla.

Cieneguilla was the worst defeat of the US Army in the West up to that time, and it was just one of the first major battles between the US Army and Apache forces during the Ute Wars. According to one version of events, the 60 dragoons, under the direction of a Lt. Davidson, had engaged in an unauthorized attack on theJicarilla while they were out on patrol. Others claimed that the Jicarilla either ambushed the Army or taunted them into attack. Kit Carson, who was agent for the Jicarilla, would defend Davidson’s actions—and after this fight, he served as a scout against the Jicarilla.

Much like the Sioux defeat of Custer at Little Big Horn, the Jicarilla’s victory over the Army led to retribution and disaster. The Jicarilla were defeated and faded from memory before the Civil War. These are the events that brought them to ruin.