Mike Greenblatt will be signing copies of “Woodstock 50th Anniversary” in PA next month.

All Mike Greenblatt has ever done in his entire life is listen to music and tell people about it, be it as a New York City publicist, editor or freelance journalist. It’s been five decades of journalistically chronicling rock’n’roll in all of its many permutations. Whether flying with Hank Williams, Jr. in his private jet, driving around the Jersey Shore with Springsteen, getting angrily thrown against a backstage wall by Meat Loaf or being locked in a dressing room with Jerry Lee Lewis threatening to kill him, Greenblatt’s voice—influenced by Nick Tosches, Henry Miller and James Ellroy—has yelled loud and long.

It all started in New Jersey as Music Editor of the Aquarian Weekly. As Editor of Modern Screen’s Country Music, Wrestling World and Metal Maniacs, it was this bizarre triumvirate that illustrates the rebel yell within his soul, thus he went on to write about Serial Killers, Vampires, Zombies and Republicans. His ‘80s “Pot Page” column was way ahead of its time.

Interviews with Elton John, the Eagles (where he extemporaneously interviewed Joe Walsh at side-by-side urinals deep within the bowels of Giants Stadium), Paul McCartney, Blondie, The Allman Brothers, Waylon Jennings and hundreds of others have preceded his first book, at 68, Woodstock 50th Anniversary: Back To Yasgur’s Farm (Krause Publications, a Division of F + W Media). The author has long maintained that his political demeanor and the state of musical zen he can still achieve at concerts today, despite his surroundings, is a direct result of his Woodstock experience.
Greenblatt lives in Easton, Pennsylvania with his music-teacher wife and their two rescue Beagles. He is the proud parent of two and grandfather of two, yet still finds time to watch as much baseball as humanly possible. 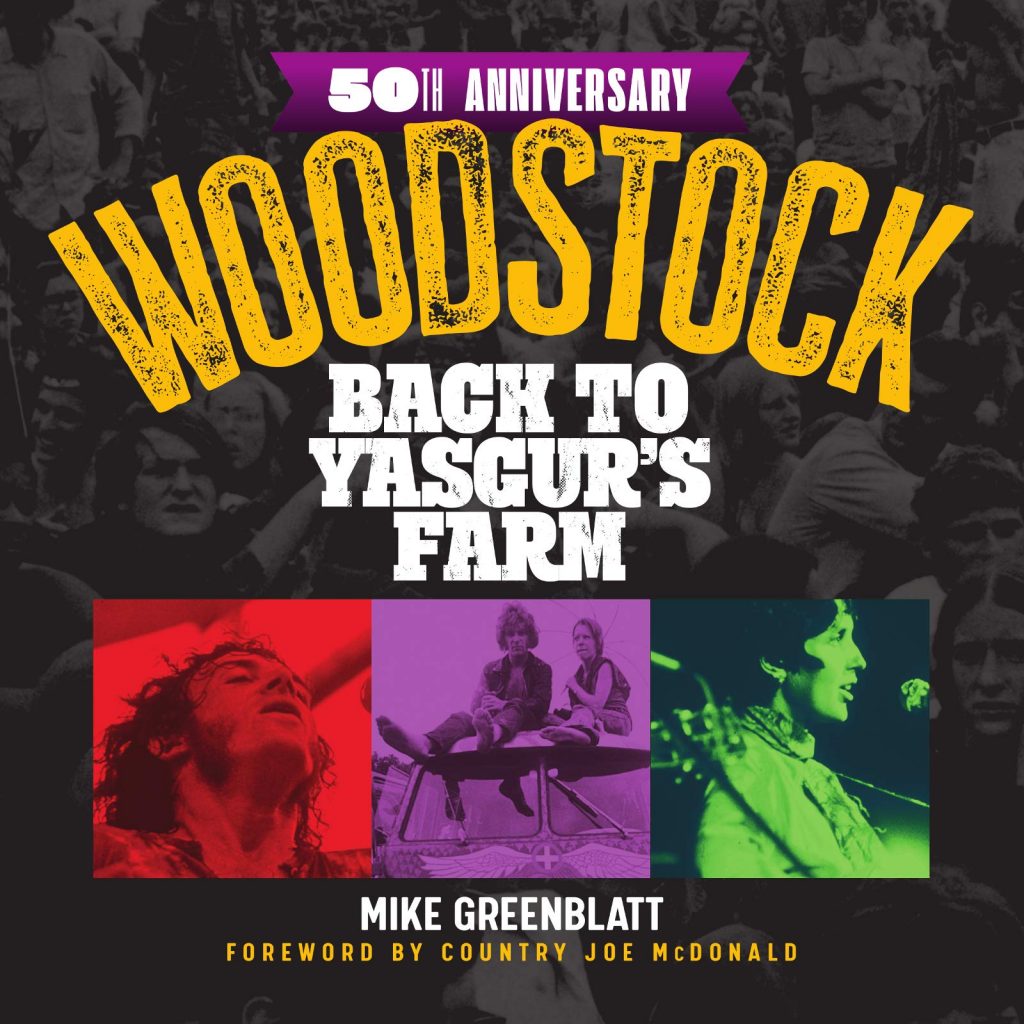 The year was 1969. Richard Nixon was in the White House. Neil Armstrong was on the Moon. And revolution was in the air. In that backdrop, 500,000 young people gathered on a mid-August weekend in upstate New York for the promise of three days of peace and music. What they experienced at the Woodstock Music and Art Fair was something far greater.

Celebrating “the greatest peaceful event in history,” Woodstock 50th Anniversary: Back to Yasgur’s Farmoffers a dazzlingly and compelling front-row seat to the most important concert in rock history, an implausible happening filled with trials and triumphs that defined a generation.

Author and Woodstock attendee Mike Greenblatt brilliantly captures the power of music’s greatest performers such as Jimi Hendrix, Janis Joplin, Joe Cocker, Santana and the Who, while sharing stories both personal and audacious from the crowd of a half million strong who embraced not only the music but each other.

The book features a Foreword by Country Joe McDonald, whose rousing solo acoustic version of “The Fish Cheer/I-Feel-Like-I’m-Fixin’-To-Die Rag” was one of the most memorable performances at Woodstock.  In addition, all 32 performances at the festival are showcased.

Equal parts circus and surreal, Woodstock 50th Anniversary: Back to Yasgur’s Farm tells a transcendent tale of a musical and mythical moment in time.