Ron Jacober will be signing copies of “Immortal Moments in Cardinals History” at MO next month.

A lifelong Cardinal fan, Robert L. Tiemann saw his first Stan Musial home run in 1957. As an award-winning baseball historian, he has written several books and has contributed to and edited many journals for the Society for American Baseball Research (SABR). 314-535-4215. Ron Jacober has covered sports on radio and television in the St. Louis market for 47 years—longer than anyone other than Jack Buck. He was the long time sports director of KMOX radio. Ron has broadcast Cardinal baseball, Blues hockey, college basketball on ESPN, college football and hundreds of soccer games. He has covered the Olympics for CBS radio. He is a member of the St. Louis Radio Hall of Fame, St. Louis Media Hall of Fame and the Missouri Sports Hall of Fame. 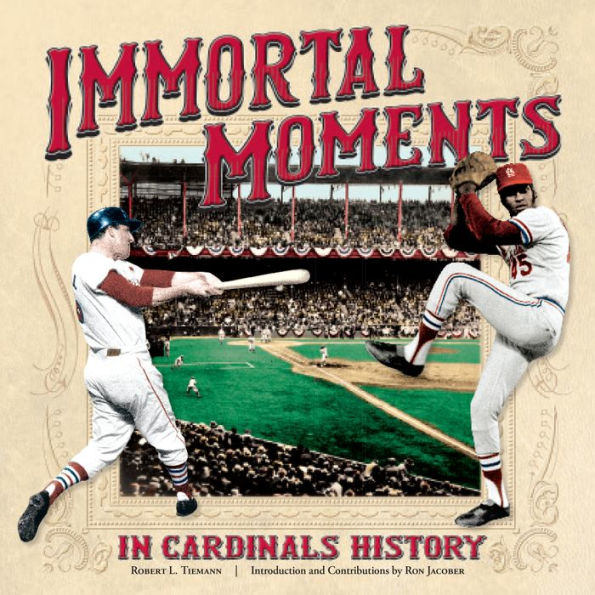 For more than a century, the St. Louis Cardinals have given their fans a long succession of glorious memories and milestones. The book Immortal Moments in Cardinal History looks back at the 100 greatest moments in franchise history, from the forgotten victories of four consecutive pennant winners in the 1880s right through the 2013 National League Championship. Arranged chronologically, this book takes Cardinal Nation on a journey from Cy Young and Grover Cleveland Alexander right on through to Chris Carpenter and Michael Wacha. Individual feats like Triple Crowns and 12-RBI games are examined alongside pennant clinchers and World Series winners. The cavalcade of names and milestones rolls on in every page: 3000 hits for Lou Brock and for Stan the Man; October heroics by Pepper Martin, Jim Edmonds, and David Freese; Home Run feats by Stan Musial, Mark McGwire, and Mark Whiten; No-Hitters by Jess Haines, Paul Dean, and Bob Forsch. The shining moments of lesser stars like Tom Lawless, Glenn Brummer, and Jose Jimenez are retold, as are the achievements of superstars like Enos Slaughter, Rogers Hornsby, and Yadier Molina. The whole spectrum Cardinal success is available in Immortal Moments in Cardinal History.