Joe Keith Bickett was born and raised in Raywick, Marion County, Kentucky roughly 60 miles south of Louisville and Lexington, Kentucky. Many years ago, he was in the business of the cultivation and the distribution of marijuana. In 1989, he was indicted in federal court in both Kentucky and Kansas for cultivation and distribution of marijuana as part of the infamous Cornbread Mafia. In 1990, he was convicted in federal court in both Kentucky and Kansas and sentenced to twenty-five years in federal prison. During his many years in federal prison, he became what is known as a “jailhouse lawyer,” helping indigent federal prisoners with their many legal problems. While in prison, he also wrote numerous memoirs about his life and personal involvement in the Cornbread Mafia. In 2011, he was released from federal prison. Since his release, he has been employed as a law clerk and paralegal with the law office of Elmer J. George in Lebanon, Kentucky. He is an avid supporter of prison reform for nonviolent offenders, the legalization of marijuana and an advocate for environmental and social justice. He enjoys the outdoors, kayaking, canoeing with his family and friends and living on a small farm in Central Kentucky. In 2016, he released his first publication titled, “The Origins of the Cornbread Mafia: A Memoir of Sorts,” which is his first-hand account about how the term, “The Cornbread Mafia” was coined many years ago.
In 2018 he released his second publication titled: “Cornbread Mafia, The Outlaws of Central Kentucky” which is a sequel to his first book and focuses on the Cornbread Mafia in the 1980s and many of its members ultimate downfall. 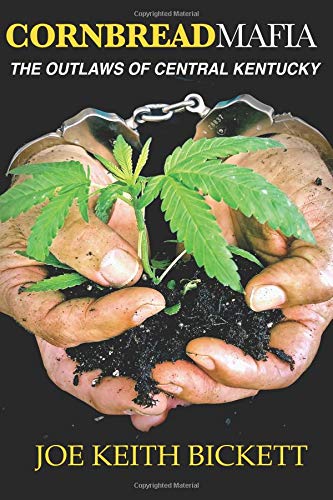 About the Book:
Cornbread Mafia, The Outlaws of Central Kentucky is author Joe Keith Bickett’s sequel to his first book, The Origins of The Cornbread Mafia, A Memoir of Sorts. As the 1980s come onto the scene, the Cornbread Mafia is faced with new obstacles from the Federal Government in order to keep their marijuana business flourishing. President Ronald Regan declares his “War on Drugs” and with it comes the Comprehensive Crime Control Act and the Anti-Drug Abuse Act, which significantly increase federal penalties and mandatory minimum sentences for those caught in the cultivation and distribution of marijuana. The stakes just got much higher for the Cornbread crew. Despite the looming threat from the Feds, along with the side-effects from the heavy use of cocaine by many of the members, the Cornbread Mafia expands their operations in the 80s into several Midwestern states and continues to smuggle, cultivate and distribute marijuana. In this memoir, Bickett reveals a Federal criminal justice system that, from his perspective, is willing to go far beyond the bounds of law and ethics to bust a bunch of pot farmers from Middle America. Joe Keith Bickett, along with Bobby Joe Shewmaker, Tommy Lee, Jimmy Bickett, Fred Hogg and several others who requested to remain anonymous, tell the unbelievable and sometimes humorous stories of their experiences in the marijuana business through the 1980s and how they all became a part of the largest marijuana cartel in US history. This collaboration of several participants of the Cornbread Mafia is the true story of The Cornbread Mafia, the Outlaws of Central Kentucky.