Drew & Jonathan Scott, HGTV’s Property Brothers, will be signing copies of “Builder Brothers: Big Plans” at various locations across the country during October.

Drew and Jonathan Scott are hosts of multiple top-rated HGTV series, including the Emmy-nominated Property Brothers, Brother vs. Brother, and Property Brothers at Home. Their shows are watched by millions of fans in over 160 countries. They have also written the New York Times bestselling It Takes Two: Our Story and Dream Home: The Property Brothers’ Ultimate Guide to Finding & Fixing Your Perfect House. 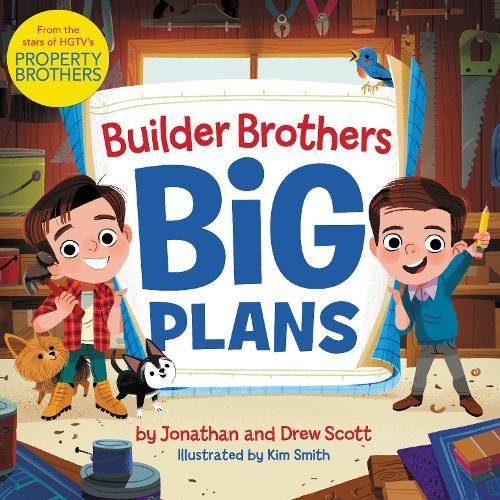 It all begins when Drew and Jonathan are doing what they do best—thinking up big plans for even bigger projects. Will they build a treehouse? A castle? A catapult? They have a whole lot of big ideas, but no one thinks they can do any of them!

The twins brainstorm, scribble, and tinker until they have the perfect big plan. They’ll save every last penny, sketch out some designs, and make a whole lot of noise—builders aren’t known for being quiet—because they know that little kids can do big things.

But what will Drew and Jonathan do when their big plans don’t go the way they’d hoped? Find out in this heartwarming new story from everyone’s favorite twins.

And the book comes complete with an original do-it-yourself building project that parents and kids can tackle together at home. Everyone knows that every big plan starts with a dream!