Ryan Serhant From Million Dollar Listing NY will be signing copies of “Sell It Like Serhant” in NJ this month.

Ryan Serhant is a costar on Bravo’s hit show Million Dollar Listing New York and the star of Sell It Like Serhant. Ryan fell into real estate by accident after giving up his acting career. He made just over $9,000 his first year in the business. Ten years later, Ryan leads a team of 60 brokers and averages a billion dollars in sales every year, making him one of the most successful real estate brokers in the world. He lives in New York City with his wife, Emilia. 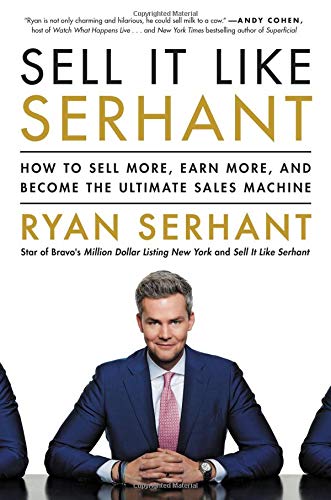 A lively and practical guide to sell anything and up your business game from one of the top realtors in the world and costar of Bravo’s Million Dollar Listing: New York and Sell It Like Serhant.

“Ryan is not only charming and hilarious, he could sell milk to a cow. This book is going to be very helpful and humorous to a lot of people looking to up their business game.”
– Andy Cohen, host of Watch What Happens Live… and New York Times bestselling author of Superficial

Ryan Serhant was a shy, jobless hand model when he entered the real estate business in 2008 at a time the country was on the verge of economic collapse. Just nine years later, he has emerged as one of the top realtors in the world and an authority on the art of selling. Whether you are selling a brownstone or a hot tub, golf balls or life insurance, Serhant shares the secrets behind how to close more deals than anyone else, expand your business, and keep clients coming back to you.

Sell It Like Serhant is a smart, at times hilarious, and always essential playbook to build confidence, generate results, and sell just about anything. You’ll find tips on:

This book is the blueprint for how to go from sales scrub to sales machine. Serhant provides useful lessons, lively stories, and examples that illustrate how anyone can employ his principles to increase profits and achieve success. Your measure of a good day will no longer depend on one deal or one client. A good salesperson never closes a deal and wonders, “What now?” The next deal is already happening. Serhant shares practical guidance on how to juggle multiple deals at once and close all of them EVERY. SINGLE. TIME.

Whatever your business or expertise, Sell It Like Serhant will make anyone a master at sales.