Karen is the daughter of baseball legend Frank Lucchesi and shares his love of baseball. Karen became VP of Pro Baseball Group which owns, operates and develops minor league baseball teams and stadiums, and acquired interest in 2015. After securing TABC Liquor Licensing rights to 3 stadiums, Karen became the President of a Independent Baseball Association.

Karen then became the principal owner of KRL, Inc. and KFL, Inc., where she develops new traditional and non-traditional revenue streams. Her role includes sales, marketing, project management and the design and start-up of professional baseball teams.

Karen Lucchesi is a multi-award-winning entrepreneur and community leader. In her talks she shares her personal experiences as a successful business owner, overcoming debilitating illnesses, the loss of everything, prison and starting over. www.karenlucchesi.com

Most people wouldn’t have any reason to keep going, but Karen is passionate about sharing with her audiences the formula of Success. Faith, Passion and Determination equals life’s vision.

She will Awe, Motivate, Encourage and Inspire!

Nominated Woman of the Year by Northeast Tarrant County.La Plaza Wellness Center was awarded Business of the Year and was featured in the top Spa Magazine in the country as one of the top wellness centers in the USA.

Karen’s passion for helping others manifests itself in facilitating the logistics for over 25 nationwide charity events with 10,000+ in attendance. Her interests range from health, poverty alleviation and children to animal welfare and all for the love of family.
Show Less 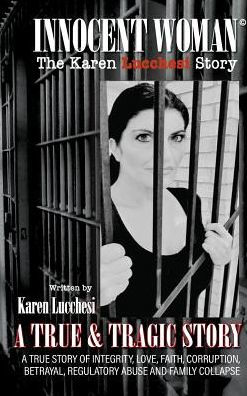 A true and tragic story. The events described in Innocent Woman, The Karen Lucchesi Story, were borne of personal experience. Karen was framed for laundering money. Her choices? Lie, plead guilty, then take a plea deal for probation or up to six months in jail, or tell the truth by pleading innocent, go to trial and face up to 10 years in prison. What would you do?

This is a raw and real-world story.

Karen believed that Americans were innocent until proven guilty, but are we merely guilty until proven innocent?