Trey Gowdy, Congressman, and Tim Scott, Senator from South Carolina, will be signing copies of “Unified” in NJ next month.

Harold Watson “Trey” Gowdy III (born August 22, 1964) is an American attorney, politician, and former federal prosecutor serving as the U.S. Representative for South Carolina’s 4th congressional district since 2011. He is a member of the Tea Party movement and a Republican. His district includes much of the Upstate region of South Carolina, including Greenville and Spartanburg.

Timothy Eugene Scott (born September 19, 1965) is an American politician of the Republican Party serving as the junior U.S. Senator for South Carolina. He was appointed in 2013 by South Carolina governor Nikki Haley to replace the retiring Jim DeMint. Scott then won a special election in 2014 and then election to a full term in 2016. 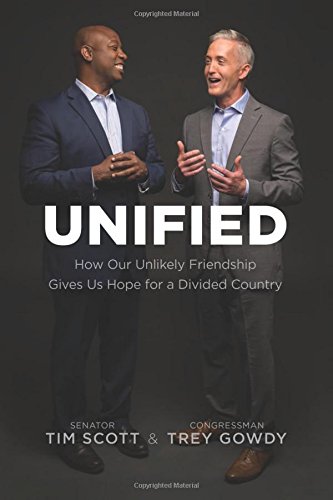 In a divided country desperate for unity, two sons of South Carolina show how different races, life experiences, and pathways can lead to a deep friendship?even in a state that was rocked to its core by the 2015 Charleston church shooting.

Tim Scott, an African-American US senator, and Trey Gowdy, a white US congressman, won’t allow racial lines to divide them. They work together, eat meals together, campaign together, and make decisions together. Yet in the fall of 2010?as two brand-new members of the US House of Representatives?they did not even know each other. Their story as politicians and friends began the moment they met and is a model for others seeking true reconciliation.

In Unified, Senator Scott and Congressman Gowdy, through honesty and vulnerability, inspire others to evaluate their own stories, clean the slate, and extend a hand of friendship that can change your churches, communities, and the world.