Jimmy O. Yang, star of “Silicon Valley”, will be signing copies of “How To American” in CA this month.

Multi-faceted actor, stand-up comedian, and writer Jimmy O. Yang is best known for his portrayal of hilarious intern Jian Yang on HBO’s Emmy-nominated comedy series Silicon Valley. Born in Hong Kong, Yang made his television debut on the CBS series 2 Broke Girls and his first late-night stand-up appearance on The Arsenio Hall Show, where he received a rare standing ovation. Other television credits include DirecTV’s Things You Shouldn’t Say Past Midnight, CBS’ Battle Creek and Criminal Minds, FXX’s It’s Always Sunny in Philadelphia, and ABC’s Marvel‘s Agents of S.H.I.E.L.D. He is currently recurring on TruTV’s half hour comedy series, Those Who Can’t. Yang is based in Los Angeles. 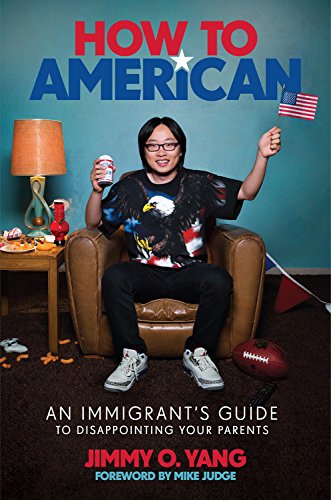 Standup comic, actor and fan favorite from the popular HBO series Silicon Valley shares his memoir of growing up as a Chinese immigrant in California and making it in Hollywood.

“I turned down a job in finance to pursue a career in stand-up comedy. My dad thought I was crazy. But I figured it was better to disappoint my parents for a few years than to disappoint myself for the rest of my life. I had to disappoint them in order to pursue what I loved. That was the only way to have my Chinese turnip cake and eat an American apple pie too.”

Jimmy O. Yang is a standup comedian, film and TV actor and fan favorite as the character Jian Yang from the popular HBO series Silicon Valley. In How to American, he shares his story of growing up as a Chinese immigrant who pursued a Hollywood career against the wishes of his parents: Yang arrived in Los Angeles from Hong Kong at age 13, learned English by watching BET RapCity for three hours a day, and worked as a strip club DJ while pursuing his comedy career. He chronicles a near deportation episode during a college trip Tijuana to finally becoming a proud US citizen ten years later. Featuring those and many other hilarious stories, while sharing some hard-earned lessons, How to American mocks stereotypes while offering tongue in cheek advice on pursuing the American dreams of fame, fortune, and strippers.