Tom DeLonge, guitarist for Blink 182, will be signing copies of “Sekret Machines Book 1” in CA this month.

Tom DeLonge is an award-winning producer, author, platinum recording artist, researcher and entrepreneur from San Diego, CA.  Today Tom, with his company To The Stars, produces original content that aims to inspire a newfound appreciation of the profound, yet unresolved, mysteries involving science and the universe through entertainment directly informed by science.  His first multi-media franchise Love, told the story of an isolated astronaut on the International Space Station and included a double album by his band Angels And Airwaves with the feature film premiering in 600 theatres across the United States.  His next franchise Poet Andersonwas inspired by a dream study conducted at Stanford University and spanned an award-winning short film, a chart-topping album, acclaimed comic book series, graphic novel and a YA science fiction novel co-written with NYTimes Bestselling author Suzanne Young.  Most recently he is working on Sekret Machines which spans both sci-fi fiction and nonfiction thesis informed by unprecedented access at the highest level of the government and science to uncover information about the UFO phenomenon with renowned authors AJ Hartley and Peter Levenda.  His Sekret Machines work has won him the 2017 UFO Researcher of the Year award. 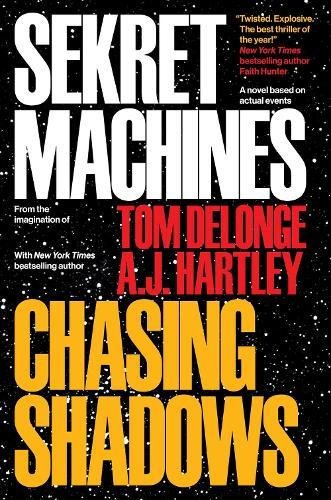 “Blurring the line of science fiction and fact, Sekret Machines is an explosive thriller that will make you question everything you’ve been told about what’s really out there.”  -Larry King

For those who know…

that something is going on…

The witnesses are legion, scattered across the world and dotted through history, people who looked up and saw something impossible lighting up the night sky. What those objects were, where they came from, and who—or what—might be inside them is the subject of fierce debate and equally fierce mockery, so that most who glimpsed them came to wish they hadn’t.

Most, but not everyone.

Among those who know what they’ve seen, and—like the toll of a bell that can’t be unrung—are forever changed by it, are a pilot, an heiress, a journalist, and a prisoner of war.  From the waning days of the 20th century’s final great war to the fraught fields of Afghanistan to the otherworldly secrets hidden amid Nevada’s dusty neverlands—the truth that is out there will propel each of them into a labyrinth of otherworldly technology and the competing aims of those who might seek to prevent—or harness—these beings of unfathomable power.  Because, as it turns out, we are not the only ones who can invent and build…and destroy.

Featuring actual events and other truths drawn from sources within the military and intelligence community, Tom DeLonge and A.J. Hartley offer a tale at once terrifying, fantastical, and perhaps all too real. Though it is, of course, a work of…  fiction?