Rhonda Shear, actress and TV host, will be signing copies of “Up All Night” in California this month.

New Orleans native Rhonda Shear is a comedian, designer, entrepreneur, actress, philanthropist, and author. For more than four decades, she has acted on hundreds of television shows, posed for Playboy, headlined in Vegas, been Miss Louisiana, built a $100 million lingerie company, paraded down Bourbon Street, and married her childhood sweetheart and the love of her life, Van Fagan. She and Van live with their pack of spoiled puppies in her Barbie Dream House in St. Petersburg, Florida, where they manage their business empire, open their home to charitable galas and gatherings of friends, and savor the good life. 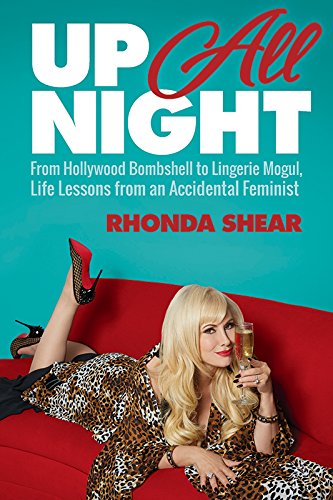 Slip on your satin pajamas, pull back the covers, and slide into bed with everyone’s favorite late-night bedtime buddy, Rhonda Shear! You know her as the smart-sexy hostess of USA: Up All Night, but did you know Rhonda was a New Orleans beauty queen? A candidate for office? A standup comic? An award-winning “bimbopreneur?” A rule-breaking feminist?

She’s been all that and more, and in this funny, naughty, candid book, Rhonda finally shares the unforgettable story of a woman who was always “too something” too pretty, too funny, too ethnic, too blonde to achieve anything, but who ended up achieving everything. Packed with vivid characters, hilarious stories, and wisdom for women of all ages, Up All Night proves that when it comes to achieving your dreams, the only voice that matters is your own.