Paula Deen, TV chef, will be signing copies of “At the Southern Table With Paula Deen” at the following locations.

PAULA DEEN, Culinary icon and queen of Southern cooking, Deen is a self-made success story who learned the secrets of Southern cooking from her grandmother. Deen’s first business, The Bag Lady, started her successful career and led to the opening of her first restaurant, The Lady and Sons, with her two sons Bobby and Jamie five years later. In addition to her success on TV and with her restaurant, Deen is a two-time Emmy award winner and the author of 14 cookbooks that have sold more than 11,000,000 copies. Paula’s magazine Cooking with Paula Deen celebrates it’s 10th year and has over 3 million readers. In 2014, Deen launched the Paula Deen Network, an interactive digital cooking network that combines cooking, lifestyle and game shows with great recipes, meal-planning tools and more. Paula has been busy. In 2015, she opened a new restaurant, Paula Deen’s Family Kitchen, in Pigeon Forge, Tennessee; launched her first free mobile game, Paula Deen’s Recipe Quest; premiered her first show on EVINE Live; and launched her podcast, What’s Cooking with Paula Deen, Paula also competed in the twenty-first season of ABC’s hit show Dancing with the Stars.

Ever grateful for all she has been blessed with, Paula continues to give back to the community. For example, Paula launched The Bag Lady Foundation to support women and families across the country who are affected by issues of hunger and abuse.

Overcoming poverty, self-doubt, and health challenges, Paula Deen has become one of cooking’s most familiar faces. Yet the most remarkable feature of Paula’s journey from her kitchen to fame is that she has remained every bit as genuine, real, and full of love as she was the day the first batch of Southern meals left her home kitchen, delivered by her sons to the hungry people of Savannah. 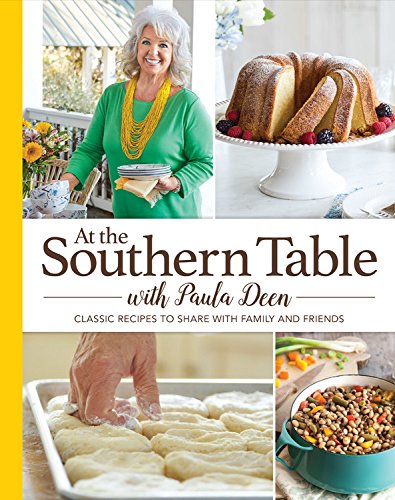 At Paula’s house, a meal is a feast filled with the tastes, aromas, and spirited conversation reminiscent of a holiday family gathering. Now, in this collection spanning ten years celebrity chef Paula Deen shares her secrets for transforming ordinary meals into memorable occasions. The magazine Cooking with Paula Deen celebrates its 10th Anniversary. This book includes entertaining tips, exciting new food preparation techniques and easy recipes for mouthwatering meals everyone is sure to love and no one will soon forget.