Michael Westmore, award winning makeup artist and star of “Face Off”, will be signing copies of “Makeup Man” in California next month.

Michael Westmore recently completed visual and oral recordings for the archives at the Academy of Motion Pictures Arts and Sciences, said to be the longest archival session the Academy has recorded. He is currently working on season #9 of Face Off. Jake Page is the author of over forty books of fiction and non-fiction, including natural history and Native American themes.

Jake Page was the founding editor of Doubleday’s Natural History Press, as well as editorial director of Natural History magazine and science editor of Smithsonian magazine. He has written more than forty books on the natural sciences, zoological topics, and Native American affairs, as well as mystery fiction. He died in 2015. 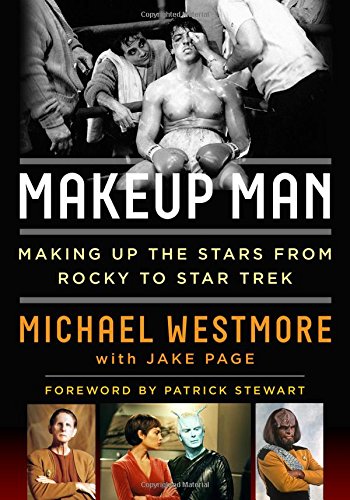 Headline: A peak behind the Hollywood mask by one of its foremost makeup artists

In Hollywood’s heyday, almost every major studio had a Westmore heading up the makeup department. Since 1917, there has never been a time when Westmores weren’t shaping the visages of stardom. For their century-long dedication to the art of makeup, the Westmores were honored with a star on the Hollywood Walk of Fame in 2008. In this lively memoir, Michael Westmore not only regales us with tales of Hollywood’s golden age, but also from his own career where he notably transformed Sylvester Stallone into Rocky Balboa and Robert DiNiro into Jake LaMotta, among many other makeup miracles.
Westmore’s talent as a makeup artist first became apparent when he created impenetrable disguises for Kirk Douglas, Tony Curtis, Burt Lancaster, Robert Mitchum, and Frank Sinatra for the 1963 film The List of Adrian Messenger. He later went on to become the preferred makeup man for Bobby Darin and Elizabeth Taylor, and worked on such movies and TV shows as The Munsters, Rosemary’s Baby, Eleanor and Franklin, New York, New York, 2010: A Space Odyssey, and Mask, for which he won an academy award. The next phase of his career was to create hundreds of alien characters for over 600 episodes of Star Trek in all its iterations, from The Next Generation to Enterprise.
Replete with anecdotes about Hollywood and its stars, from Bette Davis’s preference for being made-up in the nude to Shelley Winters’s habit of nipping from a “little bottle” while on the set, Makeup Man will satisfy any Hollywood’s fan’s appetite for gossip or a behind-the-scenes look at how tinsel town’s most iconic film characters were created.

Academy Award-winning Michael Westmore has been making up the stars for over fifty years. He frequently appears on the SyFy channel show Face Off with his daughter McKenzie Westmore.