Sarah Michelle Gellar, star of “Buffy The Vampire Slayer”, will be signing copies of “Stirring Up Fun With Food” at the following locations next month.

Sarah Michelle Gellar is an Emmy award-winning actress with starring roles in TV and film including Buffy the Vampire Slayer, Crazy Ones, and Cruel Intentions. In 2015 she co-founded Foodstirs, a culinary lifestyle brand and e-commerce site that’s modernizing baking and bringing families together in the kitchen.

Gia Russo created original content and developed products for Martha Stewart Living, and later started her own lifestyle brand, MiGi, which released bestselling cookbooks. She’s worked with brands like Williams- Sonoma and Pepperidge Farm, and Gia has contributed to hundreds of magazines. She joined forces with Sarah Michelle in 2015 to launch Foodstirs. 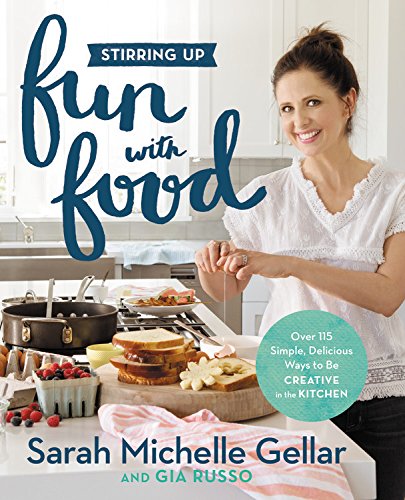 More than 100 fun food-crafting ideas that will engage, delight, and amaze kids-from actress, entrepreneur, and mom, Sarah Michelle Gellar, and former Martha Stewart Living editor Gia Russo.
Why stop with making basic brownies? Why not put them on a stick and decorate them? Why not take boring broccoli and turn it into a yummy cheese muffin instead? Sarah Michelle Gellar learned quickly that to get her kids to be adventurous with food, she had to involve them in preparing it. She wanted that process to be fun and help them develop self-confidence, creative thinking, and even math skills! So Sarah and co-author Gia Russo came up with more than 100 fun food-crafting ideas that take basic food preparation to a surprising new level.
Organized by month, the book offers projects for every occasion and theme, including Super Bowl, Valentine’s Day, Shark Week, Halloween, and even a Star Wars Day with licensed Star Wars creations! The possibilities are endless!