Rick Ankiel, former major league pitcher & outfielder, will be signing copies of “The Phenomonen” next month.

Rick Ankiel was a major-league pitcher and outfielder with the St. Louis Cardinals and Washington Nationals, among other teams, for 11 seasons. Born in 1979, Ankiel debuted with the Cardinals a month after his 20th birthday, and became the first major-league player since Babe Ruth to win at least 10 games as a pitcher and hit at least 50 home runs. He retired as a player in 2013. He is currently a studio analyst for Fox Sports Midwest. With his wife, Lory, and sons Declan and Ryker, Ankiel lives in Jupiter, Fla.

Tim Brown is an award-winning writer with 25 years’ experience covering Major League Baseball at the Los Angeles Times, the Newark Star-Ledger, the Cincinnati Enquirer, the Los Angeles Daily News and Yahoo! Sports. He co-wrote, with Jim Abbott, the New York Times bestseller, “Imperfect: An Improbable Life.” He resides with his wife, Kelly, in Venice, CA. 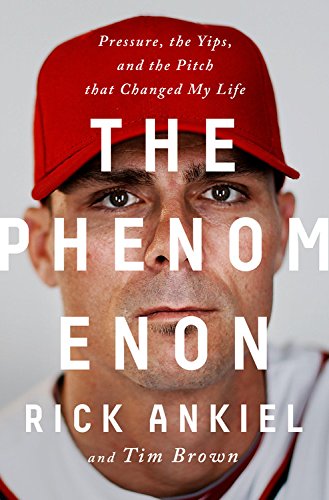 “Revealing, vulnerable, and triumphant, Rick Ankiel and Tim Brown provide a poignant reminder in this age of statistics- and computer-driven analysis that it is real people who play the game. Real people, carrying family history, huge expectations, and lifelong dreams along for the ride. This book will change how you watch the game and those who play it.” –-Jim Abbott, former MLB pitcher and bestselling author of Imperfect
Rick Ankiel had the talent to be one of the best pitchers ever. Then, one day, he lost it.
The Phenomenon is the story of how St. Louis Cardinals prodigy Rick Ankiel lost his once-in-a-generation ability to pitch–not due to an injury or a bolt of lightning, but a mysterious anxiety condition widely known as “the Yips.” It came without warning, in the middle of a playoff game, with millions of people watching. And it has never gone away.
Yet the true test of Ankiel’s character came not on the mound, but in the long days and nights that followed as he searched for a way to get back in the game. For four and a half years, he fought the Yips with every arrow in his quiver: psychotherapy, medication, deep-breathing exercises, self-help books, and, eventually, vodka. And then, after reconsidering his whole life at the age of twenty-five, Ankiel made an amazing turnaround: returning to the Major Leagues as a hitter and playing seven successful seasons.
This book is an incredible story about a universal experience–pressure–and what happened when a person on the brink had to make a choice about who he was going to be.