Tommy Roe, 1960’s pop singer, will be signing copies of “From Cabbagetown to Tinseltown and Between…” at California next month.

Tommy Roe– A member of the Rockabilly Hall of Fame, The Hit Parade Hall of Fame and the respective Georgia and Iowa Music Halls of Fame, Tommy is known and loved around the world. Today, when not playing music or making personal appearances, he spends most of his free time at home with his wife, Josette, or visiting his children, grandchildren and great grandchildren. And when time allows, which is just about anytime he can get a foursome together, he can be found lining up an 18-foot putt on one of the many golf courses in Southern California. Fans can contact Tommy via his website Tommyroe.com……..

Michael Robert Krikorian– A graduate of Fresno State University as well as being a lifelong musician and performing stand up comic, those who have read his works call Michael a master storyteller not simply a writer. He became involved with helping rock and roll stars write their memoirs in 2010, and his passion and love of the music made by those he works with shows on every page. Today he teaches school and lives with his wife Svetlana and their children in Pleasanton, California. He is always in search of a story waiting to be told and loves to hear from his readers. He can be contacted or booked for performance or a book project at krikorianmichael@aol.com. 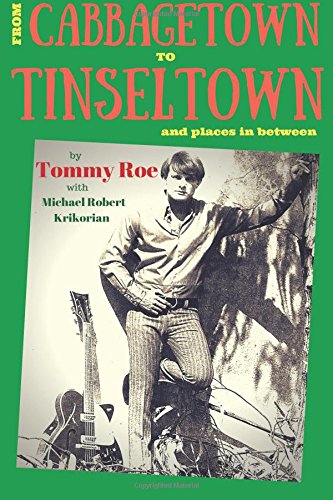 Born of humble roots to working class parents and raised in a section of Atlanta, Georgia, referred to as “Cabbagetown” until the age of six, Tommy Roe grew up in the West End and rose to make history in the world of popular music. Starting out as one of a host of southern Rockabilly artists in 1962, by decade’s end, he had attained even greater fame in Hollywood by creating a genre of his own. However, don’t think for one minute that the journey from his modest upbringing to the glitz and glamour of Tinseltown was an easy one. It was anything but that. His story shadows a period in American history that was filled with tumult and division. From the blind society of his youth led by voices on the radio to one filled with vivid, color imagery broadcast each evening on the nightly news from the jungles of Southeast Asia in the 1960s, Tommy witnessed some of the most significant changes in his country’s history and culture. In no place were those changes more evident or more clearly on display than in the music of the day. Many in the industry changed directions and altered their course choosing to use their music to convey a message of anger and divisiveness, centered mainly on events taking place on the far side of the Pacific Ocean and enhanced by an unhealthy use of assorted narcotics. By contrast, Tommy shifted gears musically as well, but he did so to combat a different sort of invasion force. His focus was on the one that had made its way across the Atlantic. And so as “hippies” began to congregate in San Francisco’s Haight/Ashbury speaking openly about revolution while “tripping out” and British songsmiths continued to deepen their foothold on the Billboard charts, spring breakers hit the beaches of Florida in 1966. When they did, they embraced a new sound that was already there making waves. However, not everyone was happy with the tide that came ashore. Some in the media were not as receptive as Tommy’s fans were to the new genre he created. They quickly began voicing their disapproval and dismay by malevolently labeling Tommy Roe, “The King of Bubblegum”. Despite the malicious coronation, as the decade of the 60s came to a close and the 1970s began, Tommy was still riding high atop the charts. However, in the fall of 1972, he learned an important lesson about human rights. He stood by his principles and beliefs and made a right turn on a one-way street in Hollywood that went only to the left. “Some of the most closed-minded people I’ve ever met are those who are celebrated for being open-minded… Those who tell us not to have labels for anyone seem to have labels for everyone… The entertainment industry is a closed shop. Don’t let anyone tell you differently!” No matter what some may think of his choices, his records speak for themselves. With more than 30 million records sold including 47 Top 40 singles worldwide, six of which making the Top 10 in the U.S., and two, “Sheila” in 1962 and 1969’s smash “Dizzy” topping the Billboard charts, Tommy was one of the true hit makers of his time. That was not something others like the Beatles or even Elvis Presley failed to notice and respect. Yes, they, too, are part of Tommy’s story. Though filled with an endless supply of down-home humor and ironic satire, in this candid and heartfelt autobiography, Tommy shoots straight from the hip. He talks openly about not only his own life and his love of his country but also lends a unique, historical perspective on his years and to events inside and outside of music. He pulls no punches and tells it like it really was and in many cases still is. This is not only the story of a life, but also a story that many inside the entertainment industry would prefer nobody ever hears. This isn’t just his story… It’s history!