Steve Jones, guitarist for the Sex Pistols, will be signing copies of “Lonely Boy” at California this month end.

Steve Jones was born in West London in 1955. He founded the Sex Pistols in 1972 with Paul Cook and Wally Nightingale and was their guitarist until the band broke up in 1978. He is a musician, record producer, and actor. He lives in Los Angeles where he hosts the radio show Jonesy’s Jukebox. 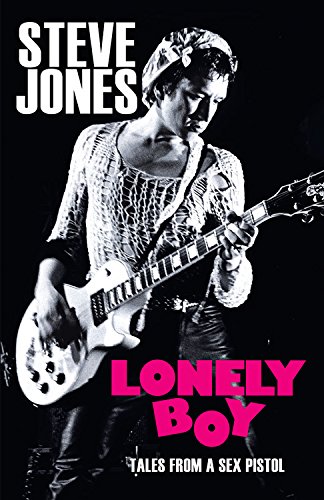 Steve Jones’s modern Dickensian tale began in the street of Hammersmith and Shepherd’s Bush, West London, where as a lonely, neglected boy living off his wits and petty thievery he was given purpose by the glam art rock of David Bowie and Roxy Music. He became one of the first generation of ragamuffin punks taken under the wings of Malcolm McLaren and Vivienne Westwood.

In Lonely Boy, Steve describes the sadness of never having known his real dad, the abuse he suffered at the hands of his stepfather, and how his interest in music and fashion saved him from a potential life of crime spent in remand centers and prisons. He takes readers on his journey from the Kings Road of the early ’70s through the years of the Sex Pistols, punk rock, and the recording of “Anarchy in the UK” and Never Mind the Bollocks. He recounts his infamous confrontation on Bill Grundy’s Today program–the interview that ushered in the “Filth and the Fury” headlines that catapulted punk into the national consciousness. And he delves into the details of his self-imposed exile in New York and Los Angeles, where he battled alcohol, heroin, and sex addiction but eventually emerged to gain fresh acclaim as an actor and radio host.

Lonely Boy is the story of an unlikely guitar hero who, with the Sex Pistols, transformed twentieth-century culture and kick-started a social revolution.