Abbi Jacobson, star of “Broad City”, will be signing copies of “Carry This Book” at the following locations in NY and CA next month.

Abbi Jacobson is one of the series creators, executive producers, and stars of Comedy Central’s critically acclaimed hit show Broad City. She graduated from the Maryland Institute College of Art with a degree in fine arts and a minor in video. After graduating, Jacobson moved to New York City and began training at Upright Citizens Brigade Theater. She was an AOL Artist and has published two books, Color This Book: New York City and Color This Book: San Francisco. She was recently nominated by the Writers Guild of America for Best Comedy Series for Broad City. The third season of Broad City began airing on February 17, 2016 on Comedy Central. 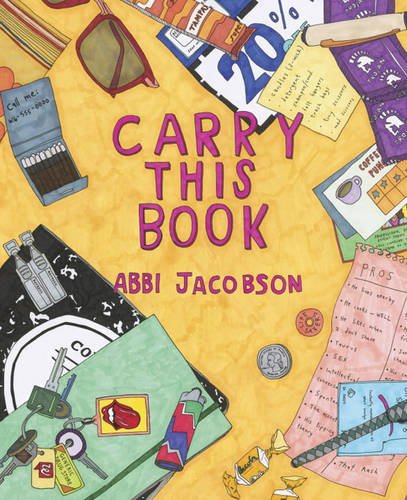 From the mind of Broad City’s Abbi Jacobson a wonderfully weird and weirdly wonderful illustrated look at the world around us—all through the framework of what we carry.

How many self-tanning lotions are in Donald Trump’s weekender? What’s inside Martha Stewart’s hand-knit fanny pack? What kind of protein bars does Michelle Obama hide in her tiny clutch at the White House Correspondents’ Dinner? Carry This Book provides a humorous and insightful look into how the things we carry around every day can make up who we are.