Mel Brooks, genius comedian and director, will be signing copies of “Young Frankenstein” at the following locations in October.

Mel Brooks is an American film director, screenwriter, comedian, actor, producer, composer and songwriter. Brooks is best known as a creator of broad film farces and comic parodies including The Producers, The Twelve Chairs, Blazing Saddles, Young Frankenstein, Silent Movie, High Anxiety, History of the World, Part I, Spaceballs and Robin Hood: Men in Tights. More recently, he had a smash hit on Broadway with the musical adaptation of his first film, The Producers. An EGOT winner, he received a Kennedy Center Honor in 2009, the 41st AFI Life Achievement Award in June 2013, and a British Film Institute Fellowship in March 2015. Three of Brooks’ classics have appeared on AFI’s 100 Years…100 Laughs list. Blazing Saddles at number 6, The Producers at number 11, and Young Frankenstein at number 13.

Judd Apatow is one of the most important comic minds of his generation. He wrote and directed the films The 40-Year-Old Virgin (co-written with Steve Carell), Knocked Up, Funny People, and This Is 40, and his producing credits include Superbad, Bridesmaids, and Anchorman. Apatow is the executive producer of HBO’s Girls. 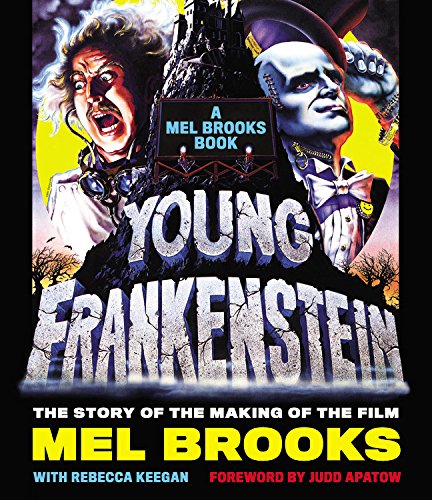 Mel Brooks’ own words telling all about the players, the filming, and studio antics during the production of this great comedy classic. The book is alive and teeming with hundreds of photos, original interviews, and hilarious commentary.

Young Frankenstein was made with deep respect for the craft and history of cinema-and for the power of a good schwanzstucker joke. This picture-driven book, written by one of the greatest comedy geniuses of all time, takes readers inside the classic film’s marvelous creation story via never-before-seen black and white and color photography from the set and contemporary interviews with the cast and crew, most notably, legendary writer-director Mel Brooks.

With access to more than 225 behind-the-scenes photos and production stills, and with captions written by Brooks, this book will also rely on interviews with gifted director of photography Gerald Hirschfeld, Academy Award-winning actress Cloris Leachman and veteran producer Michael Gruskoff.