Miriam Horn, the author of the New York Times best-selling Earth: The Sequel, will be signing copies of “Rancher, Farmer, Fisherman: Conservation Heroes of the American Heartland” in New York this month.

Miriam Horn is the author of two previous books, including the New York Times best-selling Earth: The Sequel. She works at Environmental Defense Fund and lives in New York City. 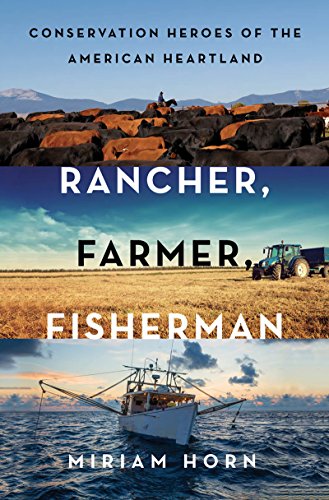 The story of a huge, largely hidden, and entirely unexpected conservation movement in America.

Many of the men and women doing today’s most consequential environmental work?restoring America’s grasslands, wildlife, soil, rivers, wetlands, and oceans?would not call themselves environmentalists; they would be too uneasy with the connotations of that word. What drives them is their deep love of the land: the iconic terrain where explorers and cowboys, pioneers and riverboat captains forged the American identity. They feel a moral responsibility to preserve this heritage and natural wealth, to ensure that their families and communities will continue to thrive.

Unfolding as a journey down the Mississippi River, Rancher, Farmer, Fisherman tells the stories of five representatives of this stewardship movement: a Montana rancher, a Kansas farmer, a Mississippi riverman, a Louisiana shrimper, and a Gulf fisherman. In exploring their work and family histories and the essential geographies they protect, Rancher, Farmer, Fisherman challenges pervasive and powerful myths about American and environmental values.