Jesse Ventura, former wrestler & politician, will be signing copies of “Jesse Ventura’s Marijuana Manifesto” at multiple locations across the country.

Jesse Ventura is the former independent governor of Minnesota. He is also a former US Navy SEAL, professional wrestler, and movie actor, a visiting fellow at Harvard s Kennedy School of Government, and a “New York Times” bestselling author of five books, including “American Conspiracies,” “Don t Start the Revolution Without Me!,” and “63 Documents the Government Doesn t Want You to Read.” He was the host and executive producer of truTV s Conspiracy Theory with Jesse Ventura. He resides in Minnesota and in Baja, Mexico.
As a publicity consultant, Jen Hobbs has represented Oscar and Emmy award-winning clients as well as politicians and authors. Her family owns and operates Hobbs Greenery, a California Medical Cannabis Collective that buys, sells, cultivates, and distributes cannabis and cannabis-infused products. Her short stories and articles have been featured in literary journals and on websites such as “Cafe Mom.” She has worked behind-the-scenes with Governor Jesse Ventura since 2007 and shares his enthusiasm for searching for the truth, no matter where it leads. She lives in Anaheim Hills, California.
Steve Kubby, founder of the American Medical Marijuana Association, is an activist, author, political candidate, speaker, cannabis warrior, policy advisor, and cancer survivor. 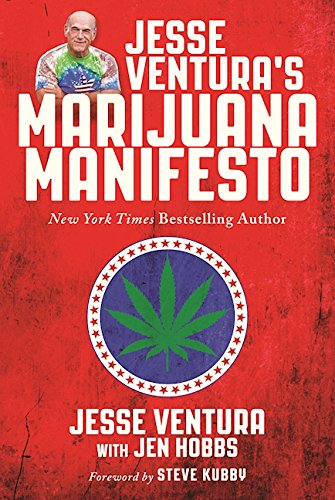 In this groundbreaking book, bestselling author Jesse Ventura lays out his philosophy on marijuana, and why he’s always been in favor of legalization. Now, more than ever before, our country needs to see full legalization of medical/recreational marijuana and hemp.

Any way you look at it, for whoever is using it, marijuana is a medicinal plant, in abundant supply. Every month and every year that goes by, we find out more positive things about it. Marijuana has been demonized through the years but obviously this plant has a great deal of positive attributes, and it’s also a renewable resource. Being a cash crop, marijuana is bad for the pharmaceutical industry. Is Big Pharma pressuring the government to continue to deny sick people access? If so, that’s truly a crime against American citizens. And as Ventura writes: “Our government won’t do the right thing and legalize marijuana unless we the people demand it, because there are so many people within our government on the payroll, all thanks to the War on Drugs.”

Jesse Ventura’s Marijuana Manifesto calls for an end to the War on Drugs. Just because something is illegal, that doesn’t mean it goes away, it just means that criminals run it. Legalizing marijuana will serve to rejuvenate our pathetic economy, and just might make people a little happier. Ventura’s book will show us all how we can take our country back.