Norm MacDonald, former “Saturday Night Live” star, will be signing copies of “Based On A True Story” in New York next month.

Norm Macdonald is a stand-up comedian, writer, and actor who lives in Los Angeles. He is the proud father of Devery and the ashamed father of Marcus. 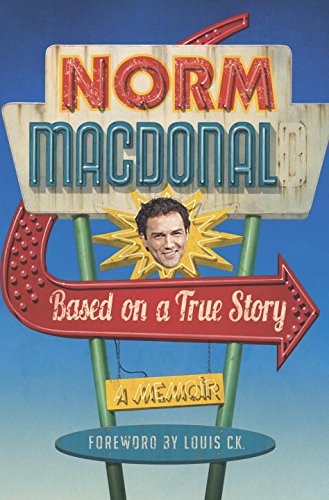 Wild, dangerous, and flat-out unbelievable, here is the incredible memoir of the actor, gambler, raconteur, SNL veteran, and one of the best stand-up comedians of all time.

As this book’s title suggests, Norm Macdonald tells the story of his life—more or less—from his origins on a farm in the-back-of-beyond Canada and an epically disastrous appearance on Star Search to his account of auditioning for Lorne Michaels and his memorable run as the anchor of Weekend Update on Saturday Night Live—until he was fired because a corporate executive didn’t think he was funny. But Based on a True Story is much more than a memoir; it’s the hilarious, inspired epic of Norm’s life.

In dispatches from a road trip to Las Vegas (part of a plan hatched to regain the fortune he’d lost to sports betting and other vices) with his sidekick and enabler, Adam Eget, Norm recounts the milestone moments, the regrets, the love affairs, the times fortune smiled on his life, and the times it refused to smile. As the clock ticks down, Norm’s debt reaches record heights, and he must find a way to evade the hefty price that’s been placed on his head by one of the most dangerous loan sharks in the country.

As a comedy legend should, Norm peppers these pages with classic jokes and fondly mythologized Hollywood stories. This wildly adventurous, totally original, and absurdly funny saga turns the conventional “comic’s memoir” on its head and gives the reader an exclusive pass into the mad, glorious mind of Norm Macdonald.

Advance praise for Based on a True Story

“Norm is brilliant and thoughtful and there is sensitivity and creative insight in his observations and stories. A lot of comics over the years have been compared to Mark Twain, but I think Norm is the only one who actually matches the guy in terms of his voice and ability. I seriously f**king love Norm Macdonald. Please buy his book. He probably needs the cash. He’s really bad with money.”—Louis C.K., from the foreword

“Norm is one of my all-time favorites, and this book was such a great read I forgot how lonely I was for a while.”—Amy Schumer

“I always thought Normie’s stand-up was the funniest thing there was. But this book gives it a run for its money.”—Adam Sandler

“Norm is one of the greatest stand-up comics who’s ever worked—a totally original voice. His sense of the ridiculous and his use of juxtaposition in his writing make him a comic’s comic. We all love Norm.”—Roseanne Barr

“Norm Macdonald is more than a triple threat—he’s a septuple threat. He is smart, funny, wry, rakish, polite, rakish . . . no, wait. He is polite, insightful, and . . . aaaaah . . . warm. No. He’s exciting. Yeah. Exciting! You never know what he’ll do. Okay, then make that unpredictable. Add that up. He’s amazing.”—Alec Baldwin

“Norm only has to grunt to make me laugh. And this book is three hundred pages? Sign me up.”—Sophia Amoruso, author of #GIRLBOSS

“Norm is a double threat. His material and timing are both top-notch, which is unheard of. He is one of my favorites, both on- and off-stage.”—Dave Attell

“David Letterman said it best: There is no one funnier than Norm Macdonald.”—Rob Schneider