Kareem Abdul-Jabbar, NBA Hall of Famer, will be signing copies of “Writings On the Wall” this month end at multiple locations across the country.

Kareem Abdul-Jabbar is the NBA’s all-time leading scorer and a Basketball Hall of Fame inductee. Since retiring, Abdul-Jabbar has been an actor and basketball coach, and has authored six books for adults and three for children, including What Color is My World?, which won the NAACP award for Best Children’s Book. In 2012, he was selected as a U.S. Cultural Ambassador. He lives in Southern California. 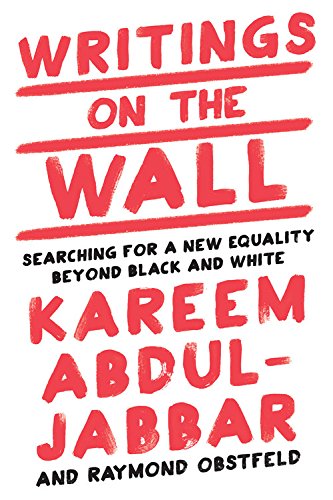 Since retiring from professional basketball as the NBA’s all-time leading scorer, six-time MVP, and Hall of Fame inductee, Kareem Abdul-Jabbar has become a lauded observer of culture and society, a New York Times bestselling author, and a regular contributor to The Washington Post, TIME magazine and TIME.com.

He now brings that keen insight to the fore in Writings on the Wall: Searching for a New Equality Beyond Black and White, his most incisive and important work of non-fiction in years. He uses his unique blend of erudition, street smarts and authentic experience in essays on the country’s seemingly irreconcilable partisan divide – both racial and political, parenthood, and his own experiences as an athlete, African-American, and a Muslim. The book is not just a collection of expositions; he also offers keen assessments of and solutions to problems such as racism in sports while speaking candidly about his experiences on the court and off.

Timed for publication as the nation debates whom to send to the White House, the combination of plain talk on issues, life lessons, and personal stories places Writings on the Wall squarely in the middle of the conversation, as many of Abdul-Jabbar’s topics are at the top of the national agenda. Whether it is sparring with Donald Trump, within the pages of TIME magazine, or full-length features in the The New York Times Magazine, writers, critics, and readers have come to agree on what The Washington Post observed: Abdul-Jabbar “has become a vital, dynamic and unorthodox cultural voice.”