Leeza Gibbons is an Emmy Award–winning television personality, successful businesswoman, social entrepreneur, and author. From hosting Entertainment Tonight, her daytime talk  show Leeza, the PBS news show My Generation, and the TV newsmagazine America Now, she is one of the best known and best loved hosts on the air. Through her New York Times bestseller Take 2: Your Guide to Creating Happy Endings and New Beginningsshe made the case for playing by your own rules and she used that philosophy to win NBC’s Celebrity Apprentice, becoming the second woman ever to earn the title. In 2002, she founded the Leeza Gibbons Memory Foundation, which offers free services for family caregivers through its signature program, Leeza’s Care Connection. She lives in gratitude with her husband in Los Angeles and has three children, a dog, and a cat. 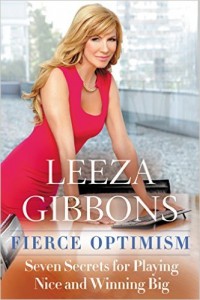 Attitude can be sexy— a practical and inspirational guide for using  kindness and positivity as a winning strategy from Celebrity Apprentice champion, Hollywood veteran, and New York Times bestselling author Leeza Gibbons.

We live in a winner-take-all world, in which only the toughest  thrive.  On the surface, from the living room to the boardroom, it’s certainly no place for nice.  Civility and kindness are often the price of admission, and empowering communication is checked at the door.

Leeza Gibbons is a culture changer who doesn’t “mess with mean.” She has fiercely redefined optimism, and used positive communication as an empowerment strategy to win with class. She refuses to sacrifice kindness as she has succeeded in getting ahead. Working for decades in an intense, often merciless industry that rewards novelty, ruthlessness, and the next big thing she has applied smart principles and excelled through savviness—without having to sell her soul or fake it.

But redefining nice does not mean being a pushover. As the winning  contestant on the hit show Celebrity Apprentice, the former host of Entertainment Tonight relied on her fresh and authentic “no drama” mentality and smart strategies to outmaneuver the other contestants without disempowering them. Throughout the competition, Leeza kept her cool and, most importantly, remained true to herself and her values. In this book, she reveals the secrets of her years of success and bares the stories and vulnerable moments that led to where she is today. Her success is proof that optimism works. You can play it your way and still win.

In Fierce Optimism Leeza combines stories from her own life and tales of other pioneering business leaders with core principles that others can apply to take them to the next level of success:

•    Engage optimism and kindness as your competitive edge

•    Pay it forward by mentoring others

Filled with down-to-earth advice and empowering stories, Fierce Optimism makes clear that with kindness, authenticity, and smart teamwork, you can be nice—and win.