Steve Forbes will be signing copies of “Reviving America: How Repealing Obamacare, Replacing the Tax Code and Reforming The Fed will Restore Hope and Prosperity” this month at an event in New York.

Steve Forbes is Chairman and Editor-in-Chief of Forbes Media.

The company’s flagship publication, Forbes, is the nation’s leading business magazine, with a circulation of more than 900,000.

A widely respected economic prognosticator, Mr. Forbes is the only writer to have won the highly prestigious Crystal Owl Award four times. The prize was formerly given by U.S. Steel Corporation to the financial journalist whose economic forecasts for the coming year proved most accurate.

In both 1996 and 2000, Mr. Forbes campaigned vigorously for the Republican nomination for the presidency. Key to his platform were a flat tax, medical savings accounts, a new Social Security system for working Americans, parental choice of schools for their children, term limits and a strong national defense. Mr. Forbes continues to energetically promote this agenda.

Mr. Forbes’ book, Money: How the Destruction of the Dollar Threatens the Global Economy – and What We Can Do About It, co-authored by Elizabeth Ames (McGraw-Hill Professional), was published in June 2014 and received the coveted Leonard E. Read Book Award.

His other books include Freedom Manifesto: Why Free Markets are Moral and Big Government Isn’t, co-authored by Elizabeth Ames (Crown Business, August 2012); How Capitalism Will Save Us: Why Free People and Free Markets Are the Best Answer in Today’s Economy, co-authored by Elizabeth Ames (Crown Business, November 2009); and Power Ambition Glory: The Stunning Parallels between Great Leaders of the Ancient World and Today…and the Lessons You Can Learn, co-authored by John Prevas (Crown Business, June 2009). He also wrote: Flat Tax Revolution: Using a Postcard to Abolish the IRS (Regnery, 2005); and A New Birth of Freedom (Regnery, 1999), a book of bold ideas for the new millennium.

In 1985, President Reagan names Mr. Forbes Chairman of the bi-partisan Board for International Broadcasting (BIB). In this position, he oversaw the operations of Radio Free Europe and Radio Liberty. Broadcasting behind the Iron Curtain, Radio Free Europe and Radio Liberty were praised by Poland’s Lech Walesa as being critical to the struggle against communism. Mr. Forbes was reappointed to his post by President George H. W. Bush and served until 1993.

Elizabeth Ames has co-authored three previous books with Steve Forbes: Money: How The Destruction of the Dollar Threatens The Global Economy?And What We Can Do About It; Freedom Manifesto: Why Free Markets Are Moral and Big Government Isn’t; and the Wall Street Journal bestseller, How Capitalism Will Save Us: Why Free People and Free Markets Are The Best Answer In Today’s Economy. 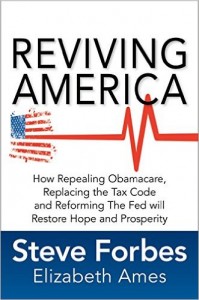 The United States has been through one of the most tumultuous decades in recent history. Polls show people on both sides of the ideological divide believe that the country has gone off track.  If something isn’t done quickly, Americans face a bleak future?continuing decline and disarray in a world that grows ever more dangerous.

Steve Forbes, two-time candidate for the GOP presidential nomination and Forbes Media Chairman, explains how today’s malaise has been caused by years of Obama’s destructive policies, a broken tax system, and the Federal Reserve’s Soviet-style controls over credit and money.

The problems are challenging. But Forbes tells us that, with the right policies, the country can bounce back faster than people think. In this compelling and much-needed book, he sets forth a three-part plan to revive America.

Patient-Driven Healthcare: The problem with healthcare, Forbes says, is that Big Government, health insurance companies, and employers are in control, not you, the patient. The key to getting high-quality, affordable healthcare is increasing competition and choice, and putting patients in charge.

Enact a Flat Tax: Today’s complex, corrupt tax code must be scrapped. The best answer is a simple Flat Tax. Forbes shows how this very bold reform would free America from the IRS and unleash an unprecedented wave of prosperity.

A Sound Dollar as Good as Gold: With its ever-fluctuating “fiat” dollar, the Federal Reserve has blocked a real recovery and is the prime cause of today’s stagnant, crisis-ridden economy. The answer?  Take the dollar out of the hands of the Washington politicians by returning to a monetary system with the value of the dollar linked to gold.

A clear and vital guide, Reviving America shows how the United States can recover the optimism and entrepreneurial dynamism that made it the greatest nation in history. These are 21st century solutions?not the failed ideas of the recent past. Forbes offers specific ideas and plans, not generalities and bromides, and is challenging policy makers to do the same.