Linda Gray is an award-winning actress, an accomplished director, a former United Nations Ambassador, and one of the world’s most recognized and admired stars. Her portrayal of Sue Ellen Ewing, in the original TV series Dallas, brought her international fame and critical acclaim. The role also earned her an Emmy nomination for Best Actress, numerous international awards, and she was voted ‘Woman of the Year’ by The Hollywood Radio & Television Society. After eleven years as the #1 show on television, Dallas returned on TNT and proved again to be the #1 drama on cable TV. She has appeared in numerous TV movies and the successful series Melrose Place, as well as starring in theater productions on Broadway and in London’s West End. 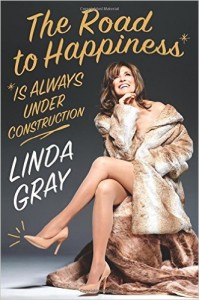 To celebrate her 75th birthday, Linda Gray, the iconic star of Dallas and timeless beauty, is sharing her road map to happiness in her revelatory memoir.

When Linda Gray, iconic star of Dallas, was twenty years old, a magazine editor coldly rejected her as a model, writing that, perhaps one day, “you might shape into something.” Since then, Linda has been evolving and growing, and has shaped into a role model for women of every age in her grace, beauty, generosity, and wisdom. She’s been through more pain and tragedy than her longtime fans realize, having suffered paralyzing polio as a child, growing up with an alcoholic mother, landing in a emotionally abusive marriage at twenty-two and living by her husband’s rules for sixteen years before she openly rebelled against him to take an acting class. At thirty-eight, Linda got her big break, as Larry Hagman’s wife on Dallas. With fame came a bitter, public divorce, trouble at home with her two kids, and the loss of her beloved sister to breast cancer. Linda got through it all—the challenges of sexism in Hollywood and the pressures of being a single working mom—with a relentlessly positive attitude that kept her cruising, with a few speed bumps, to the place of serenity she thrives in now.

To celebrate her seventy-fifth birthday, Linda is opening up about her life for the first time. Inside this book, she tells deeply personal stories with wit, humor, and candor, and reveals how she’s learned to love every day as the blessing it is and to treat herself with the kindness she bestows on friends and strangers alike. Along with wisdom, Linda has accumulated a lot of practical tips about maintaining a healthy lifestyle—how to strengthen and detoxify your body, liberate your mind, and uplift your soul—and shares them as well. Her message to “give, love, and shine, baby, shine” will fill anyone with inspiration to live life to the fullest, and never stop pursuing honesty and joy.

Order a signed copy of “The Road To Happiness” here.