Michelle Phillips (born June 4, 1944) is an American singer, songwriter, and actress. She gained fame as a member of the 1960s vocal group The Mamas & the Papas. Phillips was a founding member of The Mamas & the Papas, helping to form the vocal group in 1965 until its breakup in 1968. She co-wrote some of the band’s hits, including “California Dreamin'” and “Creeque Alley”. In 1970, Phillips sang backup vocals on a Leonard Cohen tour, and also married actor Dennis Hopper, a marriage that lasted eight days. 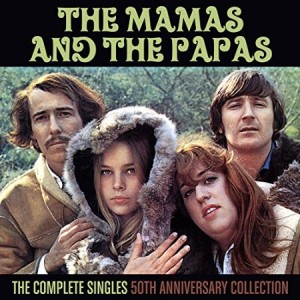 With the debut of their first hit, California Dreamin , on the charts, The Mamas and the Papas proclaimed themselves to be a potent new force in the burgeoning West Coast folk-rock movement, announcing to the world that something special and beautiful was happening in California. Now, 50 years to the day after California Dreamin entered the Billboard Hot 100 on January 8, 1966, Real Gone Music is celebrating this very special anniversary by releasing The Mamas and the Papas: The Complete Singles The 50th Anniversary Collection, a two-CD, 53-track set that includes for the first time ever the A and B side of every single the group released, all in their impossible-to-find-on-CD original mono single mixes. But this one-of-a-kind collection which is remastered by Aaron Kannowski, the engineer responsible for Real Gone s acclaimed collections of singles by fellow Dunhill label acts The Grass Roots and Steppenwolf doesn’t t stop with The Mamas and the Papas singles; it also includes the solo single sides that group members Mama Cass Elliot, Denny Doherty and John Phillips cut for the Dunhill and ABC labels, again in their rare, original single mixes. Co-Producer Ed Osborne s notes feature quotes drawn from extended interviews with Mama Michelle Phillips and Dunhill label head and producer Lou Adler, while the package also includes a number of rarely-seen images of this eminently photographable band. Many of the solo singles and B-sides have never been on CD, let alone in their single mixes; plus, over the course of listening to this set (which clocks in at over 150 minutes) you ‘re going to hear such legendary songs as Monday, Monday, California Dreamin , Creeque Alley, I Saw Her Again, Words of Love, Dream a Little Dream of Me, Glad to Be Unhappy, Dedicated to the One I Love, and It s Getting Better exactly as folks heard them over the radio back in those halcyon days. Due to the unfortunate situation with the Dunhill single master tape reels (supposedly thrown out at the behest of one of the label s owners), Mamas and Papas fans had despaired of ever hearing the group s original singles on CD. Now, after countless hours spent tracking down sources, Real Gone Music is proud to release the most significant addition to The Mamas and the Papas discography in years!