Miyoko Schinner will be signing the copies of “The Homemade Vegan Pantry: The Art of Making Your Own Staples” at the following location.

Entrepreneur for 30+ years in the food world as a bestselling author, chef and creator of delicious, decadent, healthful plant-based food, MIYOKO SCHINNER is dedicated to pleasing the omnivore’s palate in all of us. She refuses to give up on those who haven’t made the switch to plant-based foods and continues to offer progress through the senses, not just the intellect, using diverse avenues. These have included a restaurant and natural food company that distributed products nationwide and supplied cookies and pastries to United Airlines.

Inspiring the general public through her 5 cookbooks, including the best-selling and “groundbreaking” Artisan Vegan Cheese and the just-published The Homemade Vegan Pantry, Schinner also recognizes that not everyone will take up the cause in their own kitchens. To answer this call, in 2014, she launched an artisan vegan cheese company, Miyoko’s Kitchen, which set out to redefine the category of “cheese” with its unctuous, decadent, delicious flavors of handcrafted cheeses made from nuts. Miyoko’s Kitchen currently ships nationwide through ecommerce as well as regular distribution channels, and exports to Australia and Hong Kong.

No stranger to public speaking or media attention, Schinner also co-hosts the national cooking show Vegan Mashup, presents live at major events around the country, and is frequently featured in national and local media. 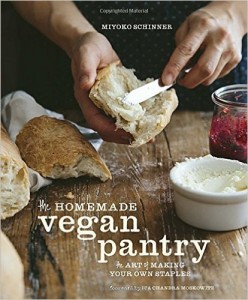 A guide to creating vegan versions of staple ingredients to stock the fridge and pantry–from dairy and meat substitutes such as vegan yogurt, butter, mayo, bacon, and cheese, to mustards, dressings, pancake mix, crackers, pasta sauces, cookies, and more.
Kitchen crafters know the pleasure of making their own staples and specialty foods, whether it’s cultured sour cream or a stellar soup stock. It’s a fresher, healthier, more natural approach to eating and living. Now vegans who are sick of buying over-processed, over-packaged products can finally join the homemade revolution. Studded with full-color photos, The Homemade Vegan Pantry celebrates beautiful, handcrafted foods that don’t take a ton of time, from ice cream and pizza dough, to granola and breakfast sausage. Miyoko Schinner guides readers through the techniques for making French-style buttercreams, roasted tomatoes, and pasta without special equipment. Her easy methods make “slow food” fast, and full of flavor. The Homemade Vegan Pantry raises the bar on plant-based cuisine, not only for vegans and vegetarians, but also for the growing number of Americans looking to eat lighter and healthier, and anyone interested in a handcrafted approach to food.