J.B. Kaufman is an author and film historian on the staff of the Walt Disney Family Foundation, and has published extensively on topics including Disney animation and American silent film. He is the author of South of the Border with Disney, and coauthor, with Russell Merritt, of Walt in Wonderland: The Silent Films of Walt Disney (winner of the Kraszna-Krausz Award and the Society for Animation Studies’ Norman McLaren-Evelyn Lambart Award, and chosen by The New York Times as a Notable Book of the Year), and Walt Disney’s Silly Symphonies. He has also been a regular contributor to the Griffith Project at Le Giornate del Cinema Muto, the distinguished annual silent-film festival in Pordenone, Italy, and speaks frequently on Disney, silent film history, and related topics. 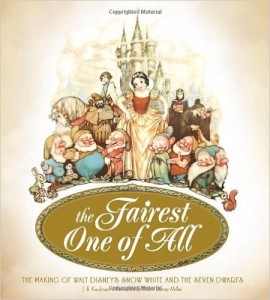 The Fairest One of All: The Making of Walt Disney’s Snow White and the Seven Dwarfs

In 2012 Disney celebrated the 75th anniversary of the Snow White movie, a beloved classic and an important milestone in film history. This book, created with the Walt Disney Family Foundation, run by Walt’s daughter, is an exploration of the making of the film that includes never-before-published facts and art.

The Fairest One of All won the award for Best Animation Book at the 2012 A113Animation Awards.

Walt Disney’s Snow White and the Seven Dwarfs was first shown to a theatrical audience in December 1937 and brought overwhelming, joyous applause from a house full of hardened film-industry professionals. In subsequent months it would open around the world, happily acclaimed by audiences and critics everywhere as one of the best films of the year, if not the decade.

From today’s perspective, its stature is even greater—named as one of the best movies of all time by the American Film Institute, and still beloved by children and adults around the world, Snow White can be seen as the flowering of an all-too-brief Golden Age of animation as well as a fascinating document of its time.

Such a level of artistic achievement doesn’t happen by accident. Walt Disney and a staff of exceptionally talented artists labored over Snow White for four years, endlessly working and reworking their scenes to achieve an ever higher standard. The result, as we know, was magnificent and game-changing for the Disney Studios and, indeed, for the art of animation itself.

This book is the first to reconstruct that process in exacting detail, with the loving attention it deserves from an internationally noted film scholar. Author J.B. Kaufman spent years researching the film’s history, interviewing participants, and studying the marvelous archival art that appears in these pages. The result is a work that can be appreciated equally as a piece of film history and as a collectable art book, a joy for anyone who loves film, animation, and the magical world that Walt Disney created.

Snow White and the Seven Dwarfs: The Art and Creation of Walt Disney’s Classic Animated Film

Released in 2012, in conjunction with the 75th anniversary of Snow White and the Seven Dwarfs, this book tells the fascinating story of the making of Walt Disney’s groundbreaking animated classic. More than 250 artworks, including rarely seen concept sketches, background paintings, and cels illustrate the genius of Walt Disney and the creative vision of the artists who produced a beloved milestone in cinematic history.

In 1933, Walt Disney was a rising star in the world of animation, just beginning to become a household name. Ambitious new ideas emerged from the Disney studio on a regular basis, and the film world waited eagerly to see what the creative young filmmaker would do next. The answer surprised them all: a full-length animated feature film, based on the traditional tale Snow White and the Seven Dwarfs. The production took three years and the talents of many of Hollywood’s top artists . . . and, of course, created one of the best-loved classics of all time. This book, based on a ground-breaking exhibition of both familiar and never-before-seen art from the Walt Disney Animation Research Library, walks the reader scene by scene through the movie, accompanying the art with behind-the-scenes stories about the film’s production.

The book features over 200 pieces of art, many reproduced from original concept sketches, background paintings, and production cels, as well as alternate character concepts, deleted scenes, and step-by-step process shots.