Jeremy Roenick, former NHL superstar, will be signing the copies of “Shoot First, Pass Later” at several locations across the country.

Jeremy Roenick is a member of the U.S. Hockey Hall of Fame and one of only four American-born players to score 500 or more career NHL goals. He is currently a hockey analyst for NBC. He lives in Scottsdale, Arizona. Kevin Allen is the author or coauthor of more than a dozen sports books, including Brett: His Own Story, Star-Spangled Hockey: Celebrating 75 Years of USA Hockey, and Without Fear: Hockey’s 50 Greatest Goaltenders. He lives in Ypsilanti, Michigan. Chris Chelios was a defenseman who played in the NHL for 26 seasons for the Chicago Blackhawks, Detroit Red Wings, Montreal Canadiens, and Atlanta Thrashers. He was elected to the Hockey Hall of Fame in 2013 and won three Stanley Cups. He is currently the executive advisor to general manager of the Detroit Red Wings. He lives in Bloomfield Hills, Michigan. 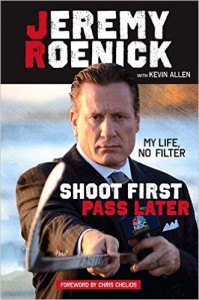 In this honest, no-nonsense book by one of the greatest American stars the NHL has ever known, Jeremy Roenick showcases his skill as a hockey storyteller

In his one-of-a-kind way, Roenick shares stories from his 20-year career with the Chicago Blackhawks, Phoenix Coyotes, Philadelphia Flyers, Los Angeles Kings, and San Jose Sharks, providing an inside perspective on the oddities of life as a pro athlete. He explains why he openly considered the pros and cons of fighting a fan, opens up about tales of partying on road trips, and even how he became friends with former Vice President Dan Quayle. In one chapter, Roenick lends the pen to his wife, Tracee, to tell her side of the story. Nothing is held back as J. R. reveals his opinions about teammates, opponents, and the future of the game.