Illeana Douglas, star of “Cape Fear” and “Action”, will be signing the copies of “I Blame Dennis Hopper” at the following two locations.

Celebrated actress, comedienne, writer, producer, director, Illeana Douglas has starred in films like Goodfellas, Cape Fear, To Die For, Picture Perfect, Ghost World, as well as TV shows from Six Feet Under to Welcome to Sweden. She was an Internet pioneer with Easy To Assemble; millions have watched the web series she created and starred in from 2008 to 2013. As part of the Turner Classic Movies family she hosted Second Looks, and has done film introductions and memorable interviews with some of Hollywood’s greatest. She’s probably watching a movie right now. 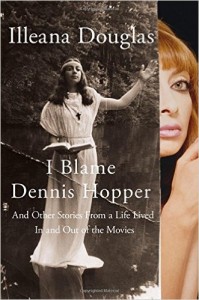 From award-winning actress Illeana Douglas comes a memoir about learning to survive in Hollywood while staying true to her quirky vision of the world.

In 1969 Illeana Douglas’ parents saw the film Easy Rider and were transformed. Taking Dennis Hopper’s words, “That’s what it’s all about man” to heart, they abandoned their comfortable upper middle class life and gave Illeana a childhood filled with hippies, goats, free spirits, and free love. Illeana writes, “Since it was all out of my control, I began to think of my life as a movie, with a Dennis Hopper-like father at the center of it.”

I Blame Dennis Hopper is a testament to the power of art and the tenacity of passion. It is a rollicking, funny, at times tender exploration of the way movies can change our lives. With crackling humor and a full heart, Douglas describes how a good Liza Minnelli impression helped her land her first gig and how Rudy Valley taught her the meaning of being a show biz trouper. From her first experience being on set with her grandfather and mentor-two-time Academy Award-winning actor Melvyn Douglas-to the moment she was discovered by Martin Scorsese for her blood-curdling scream and cast in her first film, to starring in movies alongside Robert DeNiro, Nicole Kidman, and Ethan Hawke, to becoming an award winning writer, director and producer in her own right, I Blame Dennis Hopper is an irresistible love letter to movies and filmmaking. Writing from the perspective of the ultimate show business fan, Douglas packs each page with hilarious anecdotes, bizarre coincidences, and fateful meetings that seem, well, right out of a plot of a movie.

I Blame Dennis Hopper is the story of one woman’s experience in show business, but it is also a genuine reminder of why we all love the movies: for the glitz, the glamor, the sweat, passion, humor, and escape they offer us all.