Tuesday Knight & Brooke Bundy, stars of A Nightmare on Elm Street 4, will be signing the copies of “Nightmare” at the following location.

Joan Lowery Nixon was the author of more than 130 books for young readers and was the only four-time winner of the Edgar Allan Poe Best Young Adult Mystery Award. She received the award for The Kidnapping of Christina Lattimore, The Séance, The Name of the Game Was Murder, and The Other Side of the Dark, which also won the California Young Reader Medal. Her historical fiction included the award-winning series The Orphan Train Adventures, Orphan Train Children, and Colonial Williamsburg: Young Americans. 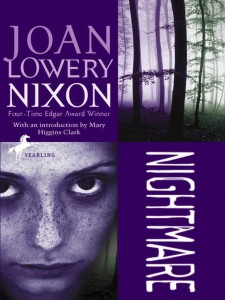 Emily has never fit in with her overachieving family. Instead of getting straight As, she sits in the back row and hides behind her hair. As a result, her parents have enrolled her for the summer at Camp Excel, an academic camp for underachievers. Emily doesn’t want to go, and not just because she thinks it isn’t necessary. Since she was a child, she’s been plagued by a recurring nightmare. And something about this camp feels familiar. Has she been there before? Why can’t she remember?
With the help of two new friends, Emily discovers that her nightmare is not just in her head. Someone at Camp Excel has a secret and will do anything—even kill—to keep Emily from uncovering the truth.

“Readers will once again fall under Nixon’s spell as they enjoy this page-turner.” –School Library Journal

“[An] inimitable blend of horror and whodunit.” –Booklist