Dick Van Dyke, star of “Mary Poppins” and “The Dick Van Dyke Show”, will be signing the copies of “Keep Moving” at the following location.

Dick Van Dyke is a Hollywood icon and New York Times bestselling author of My Lucky Life In and Out of Show Business. He has received the Theatre World Award, a Tony, a Grammy, and four Emmy awards, as well as the Screen Actors Guild Life Achievement Award in 2013. He lives in California.

Todd Gold is a New York Times best-selling author who has collaborated on several dozen books with celebrities including Belinda Carlisle, Maureen McCormick, Drew Barrymore, and Sonny Bono, among others. 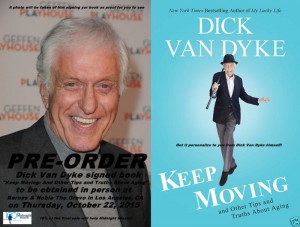 Beloved Hollywood icon Dick Van Dyke will celebrate his 90th birthday in December 2015. He’s an established legend, having starred in Mary Poppins, Chitty Chitty Bang Bang, and The Dick Van Dyke Show. And yet he’s still keeping himself busy, entertaining America on television, movies, the stage, and social media. Everyone wonders, “How does he do it?” For the first time, Van Dyke will share his secrets and tips on old age: Just keep moving.

In a fun and folksy way of addressing readers, Keep Moving will serve as an instruction book on how to embrace old age with a positive attitude. The chapters are filled with exclusive personal anecdotes that explore various themes on aging: how to adapt to the physical and social changes, deal with loss of friends and loved ones, stay current, fall in love again, and “keep moving” every day like there’s no tomorrow.