Love has hit us all where it hurts and in the book This May Sound Crazy, Abigail Breslin teaches women how to explore love in the land of the digital age.

Abigail Breslin is an Academy Award-nominated actress and musician. Starring in her first film, Signs, at the age of five, she was nominated for Best Supporting Actress a few years later for her role in Little Miss Sunshine. She’s gone on to star in several hits and critically acclaimed films, including Ender’s Game and August: Osage County, as well as performing on Broadway at age thirteen as Helen Keller in The Miracle Worker. In the fall of 2015, she will star alongside Emma Roberts, Lea Michele, Nick Jonas, and Jamie Lee Curtis in Scream Queens, Fox’s new hour-long horror comedy/drama television series from Glee creator Ryan Murphy. Her debut album releases in 2015. She is an avid blogger and lives in New York City. 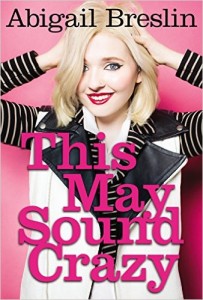 Academy Award-nominated actress and musician Abigail Breslin is your best friend in her publishing debut, a collection of hilarious and heartfelt nonfiction essays on the subjects nearest and dearest to our hearts: love, loss, and Tumblr.

Growing up in film and the online era, Abigail knows better than anyone—it’s rough out there in love-land. And this generation is ill-prepared to handle it gracefully. Let’s be honest: if Cinderella had been on Twitter, she’d have ended up a crazy old cat lady like the rest of us. #realtalk

So when your “boyfriend” is liking different eligible young things’ selfies, what’s a modern ingenue to do? Put down the iPhone, step away from the hair dye, and ~chill~. Abbie is here with cautionary tales and solid advice on being a classy-ass lady in the digital age.

Because, girls, we’re more than what meets the newsfeed. And this may sound crazy…

But we’ve got this.

Plus, this book is gorgeous inside and out. With a foil cover and heavily designed interior, this collection will be the crowning jewel on any teen’s nightstand.