Joseph R. Fornieri, author and director of the Center for Statesmanship, Law, and Liberty, will be signing copies of “Abraham Lincoln, Philosopher Statesman” and he wants to see you there!

Joseph R. Fornieri is a professor of political science at the Rochester Institute of Technology and the director of the Center for Statesmanship, Law, and Liberty. He is the author or editor of five books, including Abraham Lincoln’s Political Faith and, with Sara Vaughn Gabbard, Lincoln’s America. 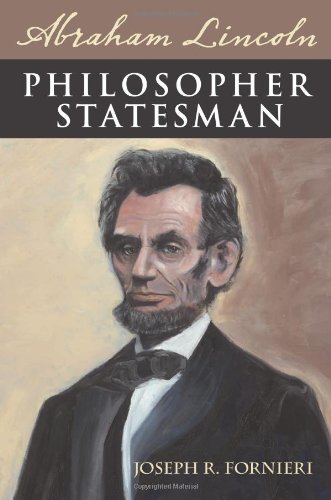 What constitutes Lincoln’s political greatness as a statesman? As a great leader, he saved the Union, presided over the end of slavery, and helped to pave the way for an interracial democracy. His great speeches provide enduring wisdom about human equality, democracy, free labor, and free society. Joseph R. Fornieri contends that Lincoln’s political genius is best understood in terms of a philosophical statesmanship that united greatness of thought and action, one that combined theory and practice. This philosophical statesmanship, Fornieri argues, can best be understood in terms of six dimensions of political leadership: wisdom, prudence, duty, magnanimity, rhetoric, and patriotism. Drawing on insights from history, politics, and philosophy, Fornieri tackles the question of how Lincoln’s statesmanship displayed each of these crucial elements.

Providing an accessible framework for understanding Lincoln’s statesmanship, this thoughtful study examines the sixteenth president’s political leadership in terms of the traditional moral vision of statecraft as understood by epic political philosophers such as Aristotle and St. Thomas Aquinas. Fornieri contends that Lincoln’s character is best understood in terms of Aquinas’s understanding of magnanimity or greatness of soul, the crowning virtue of statesmanship. True political greatness, as embodied by Lincoln, involves both humility and sacrificial service for the common good. The enduring wisdom and timeless teachings of these great thinkers, Fornieri shows, can lead to a deeper appreciation of statesmanship and of its embodiment in Abraham Lincoln.

With the great philosophers and books of western civilization as his guide, Fornieri demonstrates the important contribution of normative political philosophy to an understanding of our sixteenth president. Informed by political theory that draws on the classics in revealing the timelessness of Lincoln’s example, his interdisciplinary study offers profound insights for anyone interested in the nature of leadership, statesmanship, political philosophy, political ethics, political history, and constitutional law.