Martha White, writer and editor will be signing copies of “E. B. White on Dogs” in New York and you should be there!

E.B. White, the author of twenty books of prose and poetry, was awarded the 1970 Laura Ingalls Wilder Medal for his children’s books, Stuart Little and Charlotte’s Web. This award is now given every three years “to an author or illustrator whose books, published in the United States, have, over a period of years, make a substantial and lasting contribution to literature for children.” The year 1970 also marked the publication of Mr. White’s third book for children, The Trumpet of the Swan, honored by The International Board on Books for Young People as an outstanding example of literature with international importance. In 1973, it received the Sequoyah Award (Oklahoma) and the William Allen White Award (Kansas), voted by the school children of those states as their “favorite book” of the year.

Martha White is a writer and editor who lives on the coast of Maine. A longtime contributing editor to Yankee Publishing and The Old Farmer’s Almanac, she also compiled two weekly columns for United Feature Syndicate for many years. Her articles, book reviews, short stories, and essays have been published in The New York Times; The Boston Globe; Christian Science Monitor; Early American Life, Country Journal, Down East; Garden Design, Maine Boats Homes and Harbors, and numerous other national magazines and small presses. 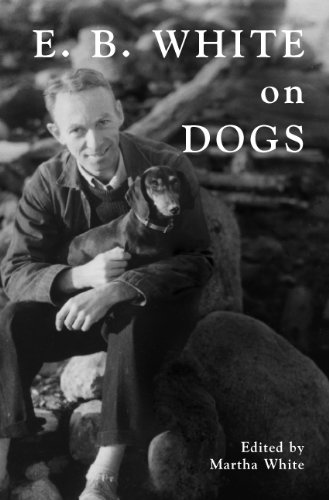 E. B. White (1899 1985) is best known for his children’s books, Charlotte’s Web, Stuart Little, and The Trumpet of the Swan. Columnist for The New Yorker for over half a century and co-author of Strunk and White’s The Elements of Style, White hit his stride as an American literary icon when he began publishing his ‘One Man’s Meat’ columns from his saltwater farm on the coast of Maine.

In E. B. White on Dogs, his granddaughter and manager of his literary estate, Martha White, has compiled the best and funniest of his essays, poems, letters, and sketches depicting over a dozen of White’s various canine companions. Featured here are favorite essays such as ‘Two Letters, Both Open,’ where White takes on the Internal Revenue Service, and also ‘Bedfellows,’ with its ‘fraudulent reports’; from White’s ignoble old dachshund, Fred. (‘I just saw an eagle go by. It was carrying a baby.’) From The New Yorker’s ‘The Talk of the Town’ are some little-known Notes and Comment pieces covering dog shows, sled dog races, and the trials and tribulations of city canines, chief among them a Scotty called Daisy who was kicked out of Schrafft’s, arrested, and later run down by a Yellow Cab, prompting The New Yorker to run her ‘Obituary.’ Some previously unpublished photographs from the E. B. White Estate show the family dogs, from the first collie, to various labs, Scotties, dachshunds, half-breeds, and mutts, all well-loved.

This is a book for readers and writers who recognize a good sentence and a masterful turn of a phrase; for E. B. White fans looking for more from their favorite author; and for dog lovers who may not have discovered the wit, style, and compassion of this most distinguished of American essayists.