Fabio Viviani, “Top Chef” favorite, will be signing copies of “Fabio’s American Home Kitchen” and it would be great to see you there!

Fabio Viviani was born in Florence, Italy, where he started working at the Trattoria Il Pallaio when he was fourteen. Fabio appeared on the fifth season of Top Chef and was among the final four contestants; he was named “Fan Favorite,” and returned to Bravo to compete in Top Chef All-Stars and appeared on Life After Top Chef.

Fabio is the author of Fabio’s Italian Kitchen, and the owner and executive chef of Café Firenze in Moorpark, California; Firenze Osteria in Los Angeles; and Siena Tavern in Chicago. He will be opening more restaurants in Chicago and Miami soon. Fabio Viviani is a brand ambassador for Bertolli products. 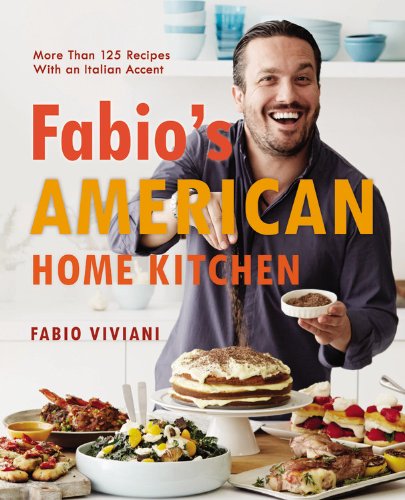 From the home kitchen of chef, restaurateur and media personality Fabio Viviani, more than 125 recipes for his favorite American dishes, infused with his own special Italian flair.

Chef Fabio Viviani may have been born and raised in Florence, Italy, where he perfected the classic Italian cooking that has made him famous, but he has embraced the food of his new home with a passion. In FABIO’S AMERICAN HOME KITCHEN, he shares the Italian-inflected recipes that he cooks for family and friends.

Written in Fabio’s charming voice, with easy-to-follow instructions and ingredients that can be found in any well-stocked supermarket, the book also includes suggested menus as well as lists of recipes ranging from quick and easy to make-ahead, family-friendly, good for a crowd, and entertaining. Beautifully illustrated with color photographs throughout, FABIO’S AMERICAN HOME KITCHEN is a book that home cooks will reach for again and again.