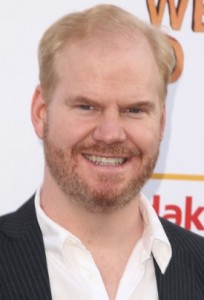 Jim Gaffigan, comedian and actor, will be signing copies of “Food: A Love Story” in New York this October!

James Christopher “Jim” Gaffigan (born July 7, 1966) is an American stand-up comedian, actor, and author.  Gaffigan produced a series of animated shorts for Late Night with Conan O’Brien, titled Pale Force, in which the animated Gaffigan and O’Brien are superheroes who fight crime with their extremely pale skin.[24] The series was nominated for a Daytime Emmy in 2007 in the category of “Outstanding Broadband Program – Comedy”. Gaffigan’s humorous quips have earned him over 2 million followers on Twitter, and he was listed by Rolling Stone as one of the “25 funniest people on Twitter” in 2012.

His memoir, Dad Is Fat, was published in 2013, by Crown Publishers. The book was on “The New York Times” Best Seller’s list for 3 months debuting at #5. 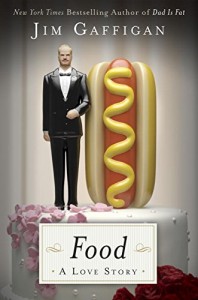 “What are my qualifications to write this book? None really. So why should you read it? Here’s why: I’m a little fat. If a thin guy were to write about a love of food and eating I’d highly recommend that you do not read his book.”

Bacon. McDonalds. Cinnabon. Hot Pockets. Kale. Stand-up comedian and author Jim Gaffigan has made his career rhapsodizing over the most treasured dishes of the American diet (“choking on bacon is like getting murdered by your lover”) and decrying the worst offenders (“kale is the early morning of foods”). Fans flocked to his New York Times bestselling book Dad is Fat to hear him riff on fatherhood but now, in his second book, he will give them what they really crave—hundreds of pages of his thoughts on all things culinary(ish). Insights such as: why he believes coconut water was invented to get people to stop drinking coconut water, why pretzel bread is #3 on his most important inventions of humankind (behind the wheel and the computer), and the answer to the age-old question “which animal is more delicious: the pig, the cow, or the bacon cheeseburger?”