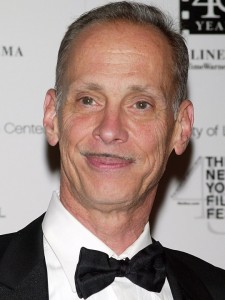 John Waters, cult film director, will be making appearances to sign copies of “Carsick” at the following locations, and would love to see you there!

Waters dabbled in mainstream filmmaking with Hairspray (1988), which introduced Ricki Lake and earned a modest gross of $8 million domestically. In 2002, Hairspray was adapted to a long-running Broadway musical, which itself was adapted to a hit musical film which earned more than $200 million worldwide. After the crossover success of the original film version of

Although he maintains apartments in New York City and San Francisco, and a summer home in Provincetown, Waters still mainly resides in his hometown of Baltimore, Maryland, where all his films are set. Many of his films take place in a neighborhood called Hampden. He is recognizable by his trademark pencil moustache, a look he has retained since the early 1970s. 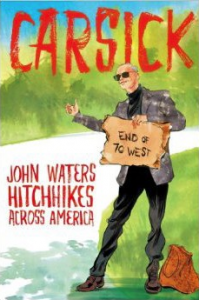 A cross-country hitchhiking journey with America’s most beloved weirdoJohn Waters is putting his life on the line. Armed with wit, a pencil-thin mustache, and a cardboard sign that reads “I’m Not Psycho,” he hitchhikes across America from Baltimore to San Francisco, braving lonely roads and treacherous drivers. But who should we be more worried about, the delicate film director with genteel manners or the unsuspecting travelers transporting the Pope of Trash?

Before he leaves for this bizarre adventure, Waters fantasizes about the best and worst possible scenarios: a friendly drug dealer hands over piles of cash to finance films with no questions asked, a demolition-derby driver makes a filthy sexual request in the middle of a race, a gun-toting drunk terrorizes and holds him hostage, and a Kansas vice squad entraps and throws him in jail. So what really happens when this cult legend sticks out his thumb and faces the open road? His real-life rides include a gentle eighty-one-year-old farmer who is convinced Waters is a hobo, an indie band on tour, and the perverse filmmaker’s unexpected hero: a young, sandy-haired Republican in a Corvette.

Laced with subversive humor and warm intelligence, Carsick is an unforgettable vacation with a wickedly funny companion—and a celebration of America’s weird, astonishing, and generous citizenry.