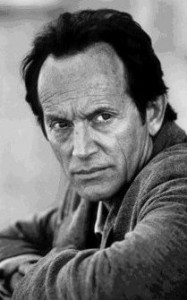 Lance Henriksen, star of “Aliens” and “The Terminator”, will be making an appearance to sign copies of his comic book series “To Hell You Ride” at the following bookstore:

Lance James Henriksen (born May 5, 1940) is an American actor and artist best known to film and television audiences for his roles in science fiction, action, and horror films such as the Alien film franchise, and on television shows such as Millennium. He is also a voice actor with his deep commanding voice.

Henriksen was born in New York City. His father, James Marin Henriksen (born in Tønsberg in 1910), was a Norwegian merchant sailor and boxer nicknamed “Icewater” who spent most of his life at sea. His mother, Margueritte Werner, struggled to find work as a dance instructor, waitress, and model. His parents divorced when he was two years old, and he was raised by his mother. As he grew up, Henriksen found himself in trouble at various schools and even saw the inside of a children’s home. Henriksen left home and dropped out of school at the age of twelve; he would not learn to read until he was 30, when he taught himself by studying film scripts.

About the Comic Books

A 5 issues comic-book series written by Lance Henriksen (Millennium (TV series), Aliens (franchise), Near Dark) and Joseph Maddrey (Nightmares in Red, White and Blue: The Evolution of the American Horror Film), with art by Tom Mandrake, published by Dark Horse Comics, 2012-2013. To Hell You Ride is a horror story that takes place in a mountain town of Colorado.

Promotional Animated Video
An animated video was produced by DarK Horse Comics to promote the release of the first issue of TO HELL YOU RIDE. The video featured a script written by Lance Henriksen and Joseph Maddrey, narration by Lance Henriksen, the artwork of Tom Mandrake in animated form and a musical score by the group TKU: Tecamachalco Underground (Cesar Gallegos/Mateo Latosa). It was posted on YouTube on October 3, 2012.

According to the main formal traits of the story, the publisher widely classifies this series as horror genre. The narrated story is more elaborated than in a regular comic. It is rather a literary fiction of magic realism genre, condensed and wrapped in the shape of a comics miniseries. Expressed with the artistic means of supernatural horror style, the content of the work is, in essence, a moral tale. By typology, the storyline goes towards an epic quest for identity and existence meaning, a journey that the hero is channeled to make, by a converged set of events. Native American culture and life are the source for the hero definition and for the supernatural features of the telling. You can purchase his comic books here on
Amazon!