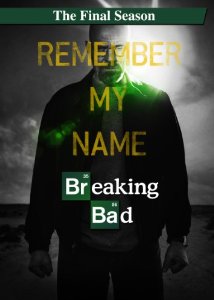 High school chemistry teacher Walter White learns he has terminal lung cancer. In order to secure his family’s financial future, he teams up with Jesse Pinkman, a former student, to make meth in an RV. When their first distributor, Krazy-8, tries to double-cross them, Walt kills his right-hand man Emilio with a chemical explosion and later strangles Krazy-8 himself in Jesse’s basement. Jesse flees to his parents’ house to seek refuge from the recent horrors, but is kicked out when his parents discover a joint — which in fact belongs to his younger brother. Walt starts chemotherapy and tells his pregnant wife, Skyler, that he agreed to let Elliott, his wealthy former colleague, help with payments. In fact, he is paying with meth profits. In the desert, near the first cook, Walt’s DEA brother-in-law, Hank, finds a gas mask from the chemistry lab at Walt’s high school. Taking an inventory of the lab, Hank observes that “some meth monkey had a feeding frenzy.” Jesse meets with Tuco, an unstable mid-level dealer, to discuss distribution. Tuco beats Jesse up and steals the meth, so Walt blows up Tuco’s headquarters. Impressed, Tuco makes a deal with Walt to distribute large volumes of meth on a weekly basis. To meet the quota, Walt devises a way to cook meth using methylamine that gives the product a distinctly blue color. Soon the, high quality blue meth becomes notorious throughout Albuquerque.

Uneasy with Tuco’s volatility, Walt and Jesse plot to kill him. Instead, Tuco abducts them and brings them to a hideout in the desert. They try to poison Tuco using ricin, but Tuco’s uncle, Hector “Tio” Salamanca, tips Tuco off. Meanwhile, Hank discovers Tuco’s desert hideout after setting up a DEA raid on his downtown headquarters and then helping Skyler look for Walt. Jesse and Walt escape moments before Hank arrives and kills Tuco in a shootout. To cover for his disappearance, Walt fakes a fugue state — supposedly a result of his treatments — claiming to forget everything from the last few days. Jesse assembles a meth-dealing crew and moves into a duplex, where he begins a relationship with his landlord, Jane. The two spiral into drug use after Jesse’s dealer Combo is killed by a rival gang.

Skyler thanks Gretchen, Elliott’s wife, for helping fund Walt’s chemo. Gretchen confronts Walt and afterwards Walt reports to Skyler that Elliott and Gretchen are cutting the money off. Skyler takes her old bookkeeping job at Beneke Fabricators and discovers that her boss, Ted, has been committing tax fraud, which she helps cover up. Meanwhile, Walt learns that his cancer is in remission. Walt and Jesse hire a lawyer, Saul Goodman, who arranges a meeting with Gus — a distributor interested in buying their meth in bulk. Gus nixes the deal when Jesse shows up to the meeting high. He gives Walt a second chance but demands his meth in an hour. Walt misses his daughter’s birth in his rush to deliver the product. Walt withholds Jesse’s share of Gus’ payment until he sobers up, but Jane blackmails Walt for the money. Walt turns it over but later returns to Jesse’s apartment and stands by as an overdosed Jane chokes to death on her own vomit. Unaware Walt had been there, Jesse blames himself for Jane’s death and checks into rehab. Walt unwittingly tells Skyler about his second phone as he undergoes surgery. The surgery is successful, but Skyler leaves him because she senses he’s lying to her. Skyler confronts Walt, who admits to being a drug manufacturer. She promises to keep quiet if he agrees to a divorce and stays away. He ignores her requests, so she sleeps with Ted.

Gus offers Walt $3 million to cook meth for three months in a state-of-the-art underground superlab that Gus built. Walt agrees and begins cooking with a new partner, Gale. Two cartel killers, the Cousins, come to New Mexico to avenge Tuco’s death by killing Walt. Gus meets with the cartel boss, who agrees to let Walt live until Gus concludes their business. Jesse leaves rehab and tries to cook meth on his own. Hank traces Jesse’s meth to the RV, which Walt destroys after luring Hank away with a fake phone call informing Hank his wife Marie had been in a car accident. Infuriated, Hank attacks Jesse and gets suspended from the DEA. When Jesse threatens to sue Hank, Walt placates him by firing Gale and hiring him back. Gus tells the Cousins that Hank is Tuco’s actual killer. They attack Hank in a shootout but are killed in the process. Skyler offers to help pay for Hank’s medical bills, claiming Walt made money from illegal gambling.

In Mexico, Federales gun down the cartel leader responsible for dispatching the Cousins. Walt deduces that Gus targeted Hank in order to protect Walt, and Walt strikes a devil’s bargain with Gus, agreeing to a $15 million production deal. Through his new girlfriend Andrea, Jesse learns that the rival dealers responsible for Combo’s death were Gus’ men. He goes after the dealers when they murder Andrea’s brother, but Walt intervenes, running down the dealers with his car to save Jesse’s life. Walt predicts that Gus will retaliate for the murders by killing them both – as soon as Gale learns to cook the blue meth. Gus’s go-to guy, Mike, brings Walt to the lab to kill him. Meanwhile, Jesse — acting on Walt’s orders — shoots Gale dead. Walt points out that Gus can’t kill his only cook, so Gus coldly orders Walt and Jesse back to work after a bloody demonstration of his power. A former colleague asks a convalescing Hank for advice on Gale’s murder, giving him a copy of the lab notes found at Gale’s apartment. Walt learns that Hank suspects Gale is Heisenberg. Skyler buys the car wash Walt used to work at in order to launder Walt’s drug money.

Killing Gale sends Jesse into a deep depression and another drug spiral. Mike whips him back into shape by giving him more responsibilities within Gus’ drug operation. Afraid for his life, Walt convinces Jesse to poison Gus with ricin, which he hides in a cigarette. Jesse is unable to follow through. Gus meanwhile tries to end his troubled relationship with the Mexican drug cartel, but they refuse. Hank tells the DEA his suspicions that Gus Fring is a major meth distributor, but they let Gus go after questioning. The IRS audits Ted. To avoid legal scrutiny, Skyler pays his back taxes and penalties using the meth money, a deal Saul helps to broker. Ted refuses to cooperate and suffers a head injury while trying to flee Saul’s men. Trying to prevent war with the Mexican cartel, Gus asks Jesse if he can cook Walt’s formula for the cartel chemists. When Jesse asks Walt to coach him, they have an explosive fight. Gus kills the cartel boss and his entourage with poisoned tequila then gloats to Tio, who was close to the cartel leaders and once killed Gus’ first partner, Max. When Gus threatens Walt’s family, Walt asks Saul to alert the DEA and attempts to contact a “disappearer” to get out of town safely, but finds that the money went to Ted’s IRS bill. The entire family is put under protection. Andrea’s son Brock is hospitalized for flu-like symptoms. Jesse accuses Walt of poisoning Brock with the ricin. Walt convinces him that it was Gus.

Walt meanwhile engages Tio in a plot against Gus: Tio pays a sham visit to the DEA. Assuming Tio snitched, Gus visits him in his nursing home and is killed when Tio detonates a bomb. Walt and Jesse burn down the super lab. Jesse tells Walt that Brock was poisoned by a plant called Lily of the Valley and is now okay. He doesn’t suspect that Walt orchestrated everything. Walt and Jesse re-start the business, now as partners. Mike reluctantly partners up when he realizes the DEA is confiscating all the money he’d been saving, and the funds used to keep Gus’ men from snitching. The DEA investigates Madrigal, a German company that worked with Gus. Lydia, a Madrigal executive, tries to kill Gus’ men before they can talk. Mike is furious but lets her live when he learns she has access to methylamine. Unable to find a suitable lab, Walt conceives and executes a plan to cook inside houses undergoing fumigation. On payday, Walt bristles when Mike collects hazard pay for his incarcerated men.

Walt tells Marie that Skyler had an affair with Ted, hence her recent strange behavior. Hank and Marie agree to look after the kids while Skyler and Walt work out their issues. As Jesse helps Lydia transport the methylamine from Madrigal, she spots a GPS tracker attached to a barrel. Walt plants a bug in Hank’s office and learns that the DEA in Houston tagged all the barrels. Since her methylamine is now useless, Lydia tells them about a large amount of methylamine shipped by train. With help from a worker at Vamonos Pest, Todd, they pull off an elaborate train heist of a thousand gallons. However, Todd kills a boy who stumbled upon them at the scene of the crime. Rattled by the boy’s murder, Jesse and Mike tell Walt they’re quitting the business and selling their shares of the methylamine. Walt strikes a new deal with the buyer, Declan, offering a 35% business stake if he distributes the meth and gives Mike $5 million. Mike parts ways with Jesse and Walt. Jesse reminds Walt that he wants out but Walt won’t listen. Jesse angrily leaves without collecting his $5 million. Walt enlists Todd as his new cooking assistant. Walt finds out the DEA is about to capture Mike and warns him just in time. When he delivers a go-bag to Mike, Walt insists Mike name the men who could still snitch, but Mike refuses. Walt fatally shoots Mike. Walt gets the names from Lydia, and hires Todd’s uncle — who has deep prison connections — to murder all of them, including Mike’s lawyer Dan. Hank, who was on the verge of turning the men, is devastated. Business thrives but Walt grows weary. Walt gives Jesse his $5 million share and tells Skyler he’s quitting the business. Later, Hank and Marie visit for a barbeque and Hank finds a book inscribed to W.W. from G.B. Hank flashes back to the time he consulted Walt about Gale Boetticher’s lab notebook. Hank reads a note — “To W.W. My Star, My Perfect Silence” — and jokes that the initials correspond with Walt’s. “You got me,” jokes Walt, putting his hands up.

Back in the present, a look of horror crosses Hank’s face as the realization sinks in: Walt is Heisenberg.
You can purchase here on Amazon.