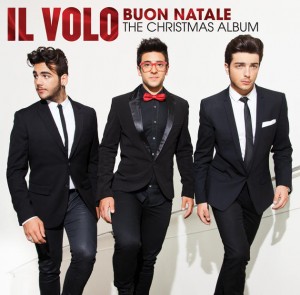 Il Volo, Italian musical trio, will be signing copies of “Buon Natale” at the following location:

In May 2009, three fresh-faced teenagers, Piero Barone (17), Ignazio Boschetto (16), and Gianluca Ginoble (16), appeared on the popular Italian talent show “Ti Lascio Una Canzone” and dazzled television viewers with their flawless rendition of the Neapolitan standard “O Sole Mio.” The boys, who won the competition easily, decided their group needed a name. “Il Volo,” meaning “flight,” was chosen to signify the feeling that these three young tenors were about to spread their wings and fly. You can order here on Amazon.

It wasn’t long before IL VOLO’s managers — Michele Torpedine (who has looked after the careers of Andrea Bocelli and Italian rock star Zucchero) and world renowned singer/producer Tony Renis — landed a worldwide recording contract for the trio with Universal Music Group which released IL VOLO’s self-titled debut album in Italy November 2010. The album is already certified gold and on its way to platinum status in their home country and will see a worldwide release in 2011. In addition, the group became the first Italian artists to sign with Geffen Records in the United States, where the album will also be released in 2011.

Piero, Ignazio, and Gianluca recorded Il Volo in Los Angeles and Rome, as well as at London’s famed Abbey Road Studios with Renis and veteran producer Humberto Gatica (Andrea Bocelli, Josh Groban, and Celine Dion). The album is a stellar showcase for these three young singers’ astonishing vocal talent and interpretive gifts as they take on a range of both new and traditional, classically influenced pop songs.

The release of Il Volo is just the beginning of what is sure to be an exciting adventure for Gianluca (who hails from Abruzzo), Ignazio (born in Bologna), and Piero (who is from Agrigento, Sicily). In February 2010, legendary producer Quincy Jones invited the boys to represent Italy by singing on the charity single “We Are The World: 25 for Haiti,” where they impressed such superstars as Celine Dion, Barbra Streisand, and Josh Groban during the recording session. A few days later, the group returned to Italy to perform during the 60th annual Sanremo Music Festival, a prestigious event attended by such luminaries as Queen Rania of Jordan and popular TV host Antonella Clerici.

They may be young, but IL VOLO’s mission is clear: “We want to share our love for this music with people all over the world, including kids our own age.” That they say, “would be our dream come true.”