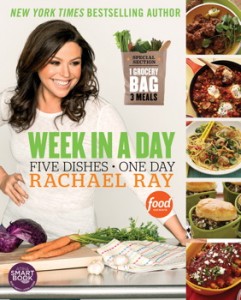 Rachael Ray, talk show host & chef, will be signging copies of “Week In a Day” at the following location:

Relax with a tasty meal after a busy day. Enjoy your evenings around the dinner table with your friends and family. Sound too good to be true? Not if you plan your Week in a Day. Rachael Ray’s Week in a Day, the companion book to her hit cooking show of the same name, offers more than two hundred recipes that will help you prepare five nights’ worth of meals in a single day. The woman who taught America how to make a meal in 30 minutes is sharing more of her practical and easy tips that will have you eating well for days to come!

Each week features its own theme, including From a Taco to Morocco, A Chicken in Every Pot, and Stew on This, allowing your taste buds to travel around the world with dishes such as Chicken and Chorizo Spanish Enchiladas, Argentine Chili with Chimichurri, and Zinfully Delicious Short Ribs.

In addition, Rachael shows you how to fit all the groceries you need for three fabulous meals into a single bag with her special section, 1 Grocery Bag, 3 Meals. And you can enjoy bonus content and extra recipes for side dishes by scanning the QR codes displayed throughout. When the weekend rolls around, this book has everything you need to get ready for your Week in a Day. You can order the book here on Amazon.

Celebrity chef Rachael Domenica Ray was born on August 25, 1968, in Glen Falls, New York, and raised in Lake George, New York, surrounded by family in the restaurant business. She herself held several jobs in the food industry, including opening Agata & Valentina specialty food market in New York City. It was while working in a gourmet food shop in Schenectady, New York, that Ray developed her signature “30 Minute Meals” classes, which were soon picked up by a local television newscast. 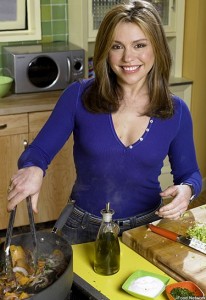 Rachael Ray was born on August 25, 1968, in New York. She held several jobs in the food industry before her signature “30 Minute Meals” classes were picked up by a local television newscast. She went on to host several Food Network shows, author tons of cookbooks, launch her own magazine, and start a nationally syndicated talk show, Rachael Ray, for which she won a Daytime Emmy Award.

The cooking segments eventually led to Ray’s first book deal and a contract with Food Network. Vivacious and oftentimes goofy, Ray’s shtick is simple recipes involving shortcuts that anyone can do at home. 30 Minute Meals was so popular that Food Network debuted three other programs starring the bubbly cook: $40 a Day, Inside Dish and Rachael Ray’s Tasty Travels. She has also authored numerous cookbooks around the quick cook theme, including 2001’s Comfort Foods, 2003’s Get Togethers and 2005’s Rachael Ray 365.

Ray launched a food and lifestyle magazine, Every Day With Rachael Ray, in 2005 and premiered a self-titled television talk show in collaboration with Oprah Winfrey in 2006. That year, 30 Minute Meals received an Emmy Award for Outstanding Service Show. She has continued to receive kudos for her work. In 2008, Rachael Ray won the Daytime Emmy Award for Outstanding Talk Show Entertainment. The syndicated program is expected to run at least through 2010.

In addition to all her books, programs and products, Ray has devoted some of her time to charity. She has established Yum-O!, a nonprofit organization, to educate young people and their families about the importance of good nutrition and to help feed American children in need.