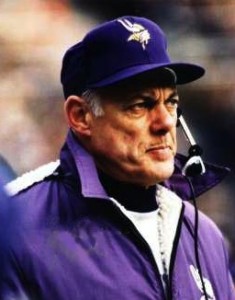 Bud Grant, former Minnesota Vikings head coach, will be signing copies of “I Did It My Way” at the following locations:

Minnesota sports legend Bud Grant tells the story of his remarkable life as a player and coach in this rich firsthand account. From surviving polio in childhood to a shining college sports career and playing both basketball and football professionally, and from coaching a championship-winning Canadian team to leading the Minnesota Vikings to four Super Bowls, Grant shares his personal perspective for the first time in this autobiography with entertaining detail and refreshing openness. The book recounts his experiences with star players and gives the inside story on Grant’s controversial retirement in 1983 and his return to the sideline in 1985. Minnesota sports lovers will also enjoy Grant’s reflection on his own idiosyncrasies, including his famous love of cold-weather football and banning of sideline heaters, and his postretirement life spent devoted to environmental protection and being an outdoorsman. You can order the book here on Amazon.

Harry Peter “Bud” Grant, Jr. (born May 20, 1927) is the former longtime American football head coach of the Minnesota Vikings of the National Football League (NFL) for eighteen seasons. Grant was the second (1967–83) and fourth (1985) head coach of the team. Prior to coaching the Vikings, he was the head coach of the Winnipeg Blue Bombers of the Canadian Football League (CFL) for ten seasons. Along with being the most successful coach in Vikings history, Grant is the third most successful professional football coach, behind Don Shula and George Halas, with a combined 290 wins in the NFL and CFL. Grant was elected to the Canadian Football Hall of Fame in 1983 and into the Pro Football Hall of Fame in 1994. He was the first coach in the history of professional football to guide teams to the Grey Cup finals and the Super Bowl.
Grant attended the University of Minnesota and was a three sport athlete in football, basketball, and baseball. Following college, he had a professional playing career for the Minneapolis Lakers of the National Basketball Association (NBA), Philadelphia Eagles of the NFL, and Winnipeg Blue Bombers of the CFL.