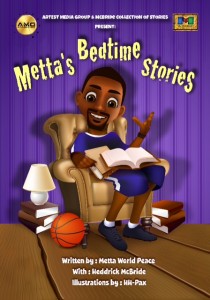 Even at 33 years old, Metta World Peace still acts like a child.

The Lakers forward wore a Cookie Monster T-shirt to his exit interview with general manager Mitch Kupchak and coach Mike D’Antoni. World Peace made a cameo appearance on Nick Jr’s “Yo Gabba Gabba.”. Plenty of his interviews involve World Peace spouting off gibberish for the sake of making people laugh.

So it’s hardly surprising that World Peace just released a children’s book titled “Metta’s Bedtime Stories.” The back of the book’s cover reveals the bedtime stories include the following titles, “Tomorrow,” “Reach for the Sky,” “One Wish,” “Mud in My Bed,” and “I’m Afraid of the Dark.”

But this 34-page illustration book geared for 4 to 10 year olds go beyond World Peace making silly jokes. The book, available, available here on Amazon, will have a portion of those proceeds benefitting World Peace’s foundation, Xcel University which primarily raises funds and supports various mental health charities and programs. Some of the proceeds will also help the foundation run by World Peace’s father, the Artest foundation, which supports inner city youth geared toward promoting non-violence.