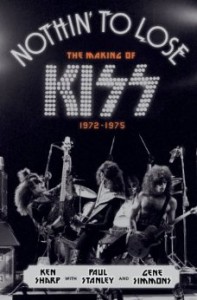 Gene Simmons & Paul Stanley, founding members of KISS, will be signing copies of “Nothin’ To Lose” at the following locations:

Nothin’ to Lose: The Making of KISS (1972-1975) chronicles, for the first time, the crucial formative years of the legendary rock band KISS, culminating with the groundbreaking success of their classic 1975 album Alive! and the smash single “Rock and Roll All Nite,” a song that nearly four decades later remains one of rock’s most enduring anthems. Drawing on more than two hundred interviews, the book offers a captivating and intimate fly-on-the-wall account of their launch, charting the struggles and ultimate victories that led them to the threshold of superstardom.

Many of KISS’s musical contemporaries from the time, most of whom shared concert bills with the band on their early tours, also lend their perspective via new interviews; these include Bob Seger, Alice Cooper, and Ted Nugent, as well as members of Aerosmith, Black Sabbath, Rush, Slade, Blue Öyster Cult, Mott the Hoople, Journey, REO Speedwagon, Styx, Raspberries, The James Gang, The New York Dolls, Iggy & the Stooges, The Ramones, Suzi Quatro, Argent, and Uriah Heep, among others.

The result is an indelible and irresistible portrait of a band on the rise and of the music scene they changed forever. 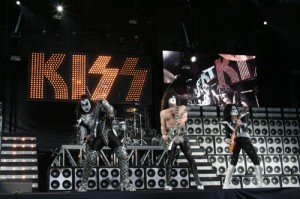 Kiss (often stylized as KISS) is an American rock band formed in New York City in January 1973. Well known for its members’ black and white face paint and flamboyant stage outfits, the group rose to prominence in the mid to late 1970s with their elaborate live performances, which featured fire breathing, blood spitting, smoking guitars, shooting rockets, levitating drum kits and pyrotechnics. Counting the 1978 solo albums, Kiss has been awarded 28 gold albums to date, the most of any American rock band. The band has sold more than 40 million albums in the United States, of which 20 million have been certified by the RIAA and their worldwide sales exceeds 100 million records, making them one of world’s best-selling bands of all time. The original 1973–’80 lineup consisted of Paul Stanley (vocals and rhythm guitar), Gene Simmons (vocals and bass guitar), Ace Frehley (lead guitar and vocals) and Peter Criss (drums and vocals).

With their makeup and costumes, they took on the personas of comic book-style characters: Starchild (Stanley), The Demon (Simmons), Spaceman or Space Ace (Frehley) and Catman (Criss). The band explains that the fans were the ones who ultimately chose their makeup designs. Stanley became the “Starchild” because of his tendency to be referred to as the “starry-eyed lover” and “hopeless romantic”. The “Demon” makeup reflected Simmons’ cynicism and dark sense of humor, as well as his affection for comic books. Frehley’s “Spaceman” makeup was a reflection of his fondness for science fiction and his supposedly being from another planet. Criss’ “Catman” makeup was in accordance with the belief that he had nine lives because of his rough childhood in Brooklyn. Because of creative differences, both Criss and Frehley were out of the group by 1982. The band’s commercial fortunes had waned considerably by that point.

Buoyed by a wave of Kiss nostalgia in the 1990s, the band announced a reunion of the original lineup in 1996. The resulting Kiss Alive/Worldwide/Reunion Tour was the top-grossing act of 1996 and 1997. Criss and Frehley have since left Kiss again, but the band continues with Eric Singer and Tommy Thayer. Stanley and Simmons have remained the only two constant members. Kiss has been named in many “Top” lists. They include Number 10 on VH1’s ‘100 Greatest Artists of Hard Rock’, 9th on ‘The Greatest Metal Bands’ list by MTV, number one on Hit Paraders’s “Top 100 Live Bands”, 56th on VH1’s “100 Greatest Artists Of All Time”, and 26th on Gibson’s “50 Greatest American Rock Bands”. Kiss was nominated for the Rock and Roll Hall of Fame, ten years after becoming eligible.