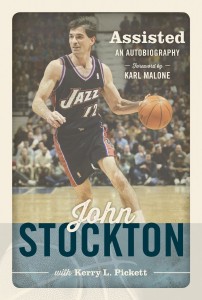 John Stockton, former NBA star, will be signing copies of “Assisted” at the following location:

A fast, gritty, durable player who could read a basketball floor as well as anyone who ever played the game, John Stockton left the NBA after nineteen seasons with the Utah Jazz, holding a massive assist record, including the career mark (15,806). He also twice led the league in steals—with a career total of 3,265—and retired as the NBA’s all-time leader. And during Stockton’s career, the Jazz never missed the playoffs.
Coach Frank Layden said, “Nobody thought that he was going to be this good. Nobody. But the thing was, nobody measured his heart.”
John’s autobiography, Assisted, pulls back the curtain on his very personal life to show fans a thoughtful recounting of the people,
places, and events that have connected with John along his path of extraordinary success. This book clearly illustrates the importance of his family, his faith, and his unparalleled competitive spirit. 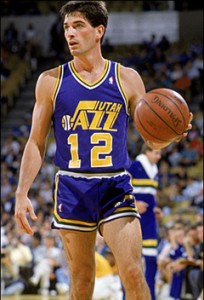 Drafted by the Utah Jazz in the first round of the 1984 NBA draft, John Stockton went on to play 19 seasons with the team, the longest tenure of any player with a single team in NBA history.

He was one of the greatest point guards of all time, and combined an uncanny ability to find the open man-more often than not Karl Malone (“the Mailman”), with whom he played in a record 1,412 games-with magician-like hands that made him one of the league’s toughest defenders and garnered him an all-time best 3,265 career steals. In fact, there are only four players in NBA history who have logged more than half of Stockton’s total. Beyond that, he shot over 50 percent from the floor over his career and was incredibly durable-in 19 seasons, he missed only 22 games.

“Stockman to Malone” was probably the most-frequent play-by-play description in NBA history, as the duo worked the pick-and-roll to such perfection they could’ve patented it. Known for his methodical preparation and work ethic, Stockton played a steady, unassuming game. One exception was Game 6 of the 1997 Western Conference Finals, in which he hit the winning 3-point shot over the Houston Rockets’ Charles Barkley to send the Jazz to the first of its two consecutive NBA Finals appearances.

In keeping with his unobtrusive Everyman image, in 2003, Stockton announced his retirement with a press statement rather than a public press conference. At that time, Stockton had amassed an NBA all-time best 15,806 assists, over 5,000 more than his nearest competitor, Mark Jackson. As a testament to his contributions, the Jazz made the NBA playoffs in every one of Stockton’s 19 seasons.